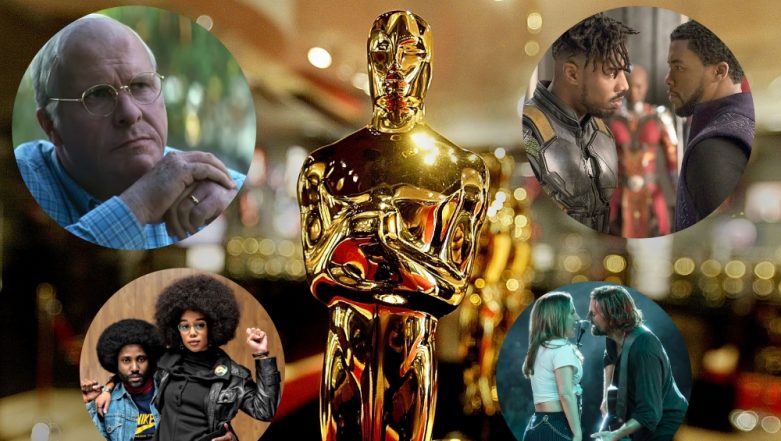 The biggest award ceremony of the year, 91st Academy Awards popularly known as Oscars 2019 is all scheduled to take place in the last week of February. The date finalised for 91st Annual Academy Awards presentation is Sunday, February 24, 5:00 pm GMT-8 (Monday, 25 February at 6:30 am IST). The much-awaited awards night will come almost a month after nominees for the Oscars 2019 in 24 categories were announced on January 22. In the run-up to the main ceremony, we will be looking at Oscars 2019 full nominations list and complete category-wise nominees at 91st Academy Awards. While the winner predictions are on, fans are waiting with bated breath for the results to be announced. Especially, the top prizes – Best Picture, Best Director, Best Actor, and Best Actress. You can download Oscars 2019 Full Nominations List in PDF Format for Free Online.

With a total of 10 nominations, Yorgos Lanthimos-directed The Favourite and Alfonso Cuarón-directed Roma are the films that received multiple nominations. Next in queue is much-talked about A Star Is Born, a romantic musical drama helmed by Bradley Cooper, who is also acting in the film along with debutant Lady Gaga. The film has earned eight nominations including Lady Gaga earning an Oscar nomination in the Best Actress category right in her maiden film. We also have Black Panther, a movie Marvel fans cannot stop gloating about after the Marvel Cinematic Universe (MCU)’s the eighteenth instalment earned seven nominations including Best Picture, making Ryan Coogler-directed film the first superhero film ever to receive such a nomination. Oscars 2019: Date, Venue, Nominations and Everything You Need To Know About The 91st Academy Awards.

Despite the new names and movies making a mark, Oscars 2019 had its fair share of nominations controversy. Fans felt there were names who deserved award nominations. The Oscars 2019 snub list included Bradley Cooper, who fans think should have been shortlisted for Best Director for A Star is Born, which has been universally lauded by the critics. Though the actor is nominated for Best Actor in a Leading Role for his portrayal of troubled musician Jack Maine in the same film. British actress Emily Blunt despite wowing cinephiles with her two releases, Mary Poppins Returns and A Quiet Place failed to garner an Oscar nomination. Claire Foy was not taken into consideration for Best Supporting Actress nomination for her work in First Man. Another big name missing out was that of Call Be By Your Name actor Timothee Chalamet, who gave a fabulous performance in Beautiful Boy. Bradley Cooper For A Star is Born, Damien Chazelle For First Man, Emily Blunt For Marry Poppins Returns - All The Academy Awards 2019 Snubs!

Best Actress Nominations at Oscars 2019:  1) Yalitza Aparicio – Roma as Cleodegaria "Cleo" Gutiérrez 2) Glenn Close – The Wife as Joan Castleman 3) Olivia Colman – The Favourite as Anne, Queen of Great Britain 4) Lady Gaga – A Star Is Born as Ally Campana 5) Melissa McCarthy – Can You Ever Forgive Me? as Lee Israel

Oscars 2019 presented by the Academy of Motion Picture Arts and Sciences (AMPAS) will honour the best films of 2018. A lot is at stake for all the nominees with everyone in the nominations itching to win the coveted Oscar statuette. Make sure to catch live and exclusive coverage of 91st Academy Awards on February 24 (February 25 in India) and root for your favourite star, director and movie.