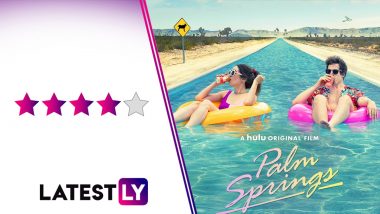 Palm Springs Movie Review: Are you a fan of romcoms? Do you like 'Jim Peralta' Andy Samberg and the 'Mother' Cristin Milioti? Do you like humour and romance with intelligent writing? What about the inimitable JK Simmons? Are you a fan of his work? Or have you enjoyed Groundhog Day? Then you better check out Palm Springs, one of the most refreshing, funny and heartwarming romcoms to come out this year. Groundhog Day 2020: Date, History and Significance of The Day That Predicts The Arrival of Spring.

Groundhog Day, for those who are haven't watched the Bill Murray classic, is about a cynical, narcissistic man who gets gets trapped in a time-loop, and is forced  to relive the same day again and again. At first it nearly makes him suicidal, but then he uses his anomaly to mend his relationships with people he care about, and thus becoming a better person in the process.

The Groundhog Day formula is about movies putting their protagonists in a time-loop situation, and get them to relive the same day again for multiple times, till something breaks the loop. Despite the obvious inspiration, this sub-genre has given some fun movies in the past like Edge of Tomorrow, The Final Girls, Happy Death Day, Source Code et al. Now Palm Springs should rank among the top in that list!

The movie is about Sarah (Cristin Milioti) who is attending the wedding of her younger half-sister, Tala (Camila Mendes) with her boyfriend Abraham (Tyler Hoechlin) in Palm Springs. At the wedding she hooks up with Nyles (Andy Samberg), a plus-one who mysteriously knows his way around. The night, however, goes into some strange directions, and the next morning, Sarah realises that she is back to the previous one! And what's more Nyles is also experiencing the same anomaly, in fact, having been doing so for countless times.

Palm Springs works firstly in the casting of two absolutely screen-owning leads, who have the knack of charming you in any movie or show they are in. Samberg's hyper-energetic enthusiasm is matched by Milioti's earnest, committed performance. Then there is the USP of the film - the time-loop device that adds enough mystery to the proceedings, while also taking the two characters into unexpected directions. You don't know whether you want to laugh or feel shocked when Nyles tells Sarah that he has slept with nearly every wedding guest, including having same-sex flings.

The movie takes some surprising dark turns, like what's eating Sarah's conscience, and or the frequent deaths they indulge in because they are now immortal (death only resets their day). The humour isn't crass, or gross, but is more whimsical and black. Brooklyn Nine-Nine Season Eight Trailer: Andy Samberg, Andre Braugher and Team Return To Make the Audience Laugh for One Last Time.

But where Palm Springs actually succeeds as a movie is in addressing the existential crises of the leads indulging in heartbreaks and jubilations, and even depression, while also serving dollops of poignance to their blossoming, but still shaky, love story. Even Sarah's relationship with her half-sister, and Nyles' dangerously-explosive bonding with another trapped time-looper Roy (JK Simmons, excellent as always) are tactfully handled. The emotional ones are the best, like the scene where Sarah and Nyles end up having sex after a surrealist pot-smoking session. Or when she learns a secret about Nyles that changes their equation. The third act, particularly, where the leads go about things right about their lives and relationships is particularly touching.

- Don't Think Too Much of the Logic

Palm Springs is easily one of the best romcoms to come out in recent times, that uses an old formula to inventively blend boy-meets-girl story into a coming-of-age saga. Palm Springs has released in theatres in India on September 24.

(The above story first appeared on LatestLY on Sep 24, 2021 06:02 PM IST. For more news and updates on politics, world, sports, entertainment and lifestyle, log on to our website latestly.com).