Paul McCartney Birthday Special: 5 Interesting Facts That You Did Not Now About The Beatles Singer

McCartney began his career with The Beatles and created their first successful album in 1967. Their album named Sgt. Pepper's Lonely Hearts Club Band was a huge hit. He had a great say in the creative decisions that the band used to make. 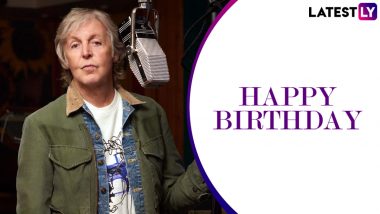 The Beatles' Paul McCartney creates music that is magic. Even after so many years of him being in the industry, there is no one that can possibly replace him. Paul's camaraderie with John Lennon still remains the most successful in history and many fans were heartbroken when the band disbanded in 1970. Apart from being a great musician, Paul is also a singer, songwriter, and record and film producer. He lives for music and is proficient in playing bass, guitar, keyboards, and drums. The Beatles Star Paul McCartney Says Working on a New Solo Album During Lockdown Saved Him.

McCartney began his career with The Beatles and created their first successful album in 1967. Their album named Sgt. Pepper's Lonely Hearts Club Band was a huge hit. He had a great say in the creative decisions that the band used to make and he gradually became the main source for providing the creative inputs for their music and film projects. His Beatles songs And I Love Her, Yesterday, Eleanor Rigby, and Blackbird rank among the most covered songs in history.

While Paul McCartney's life was quite an open book, there are many things that his fans don't know about the singer. Today as he is celebrating his 79th birthday, we take a look at some of the interesting facts about the birthday boy.

The first instrument that Paul learned to play was the trumpet. The singer then switched to guitar after he figured how to re-string a right-handed instrument and play it through his left hand. It is said that he got this idea from a Slim Whitman poster. The trumpet was a gift from his dad for his 14th birthday.

After The Beatles broke off, Paul created a band with his wife. The band was called Wings. Interestingly, before settling on this word as the name for his post-Beatles band, he had even considered naming it Turpentine.

The artist played the largest audience in recorded history. In 1989, he played a solo concert to a crowd of 350,000-plus in Brazil. It is said that the audience was the biggest paid audience to ever gather together for a gig.

Paul McCartney was once fined £100 for cultivating cannabis at his farm in Campbeltown, Scotland. McCartney at that time said that he grew the plants not knowing what it was. He claimed that the seeds were a gift from some fans.

The duo wrote 295 songs together while together as The Beatles. A Hard Day’s Night is the only album where all of the songs were written by Lennon and McCartney. Paul McCartney's Docuseries is Releasing on Hulu on July 16.

Paul McCartney created a legacy that is not going anywhere. His songs are still being heard by all the generations and we know his work will forever be evergreen. Join us in wishing the singer a happy birthday.

(The above story first appeared on LatestLY on Jun 18, 2021 09:10 AM IST. For more news and updates on politics, world, sports, entertainment and lifestyle, log on to our website latestly.com).