Priyanka Chopra Joins Keanu Reeves' Matrix 4, Will Start Shooting for it in Germany

Priyanka Chopra will fly to Berlin to join Keanu Reeves and start shooting for Lana Wachowski's Matrix 4 in Babelsberg studio. 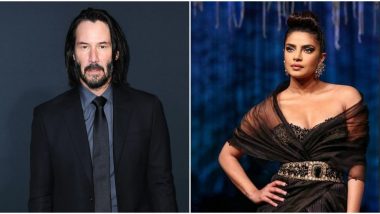 Priyanka Chopra is certainly taking the right steps in Hollywood and her list of upcoming projects already sounds so promising. The actress who's currently enjoying the lockdown with hubby Nick Jonas plans to resume work at the earliest. If a report in Rajeev Masand's column in the Open Magazine is to go by, the actress will fly to Germany to join Keanu Reeves for the shooting of Matrix 4. While PeeCee's name was never officially announced as a new addition to the film's star cast, the buzz surrounding her inclusion only intensified with time. The sequel will see Reeves collaborating with Carrie - Anne Moss. Keanu Reeves Opens Up About the Reason Why He Signed Matrix 4, Says 'It's a Wonderful Story that Resonated With Me'.

The shooting of Matrix 4 has already resumed in Berlin and PeeCee will join the team very soon. The crew had earlier started shooting in California but their schedule got disrupted after the COVID-19 pandemic. The Quantico girl is expected to start shooting her scenes in the very famous Babelsberg Studio. Matrix 4 is directed by Lana Wachowski and also stars Neil Patrick Harris and Jonathan Groff. Keanu Reeves' John Wick: Chapter 4 Director Drops a Hint About How His Sequel May Not Clash with Matrix 4 after Coronavirus Pandemic.

Earlier there were reports about the producers asking the actors to extend their contracts by a few weeks which will enable them to complete the shooting albeit with a delay. The movie was earlier slated to release on May 20, 2021, however, now it has been pushed back to April 1, 2022.

(The above story first appeared on LatestLY on Jul 03, 2020 12:15 PM IST. For more news and updates on politics, world, sports, entertainment and lifestyle, log on to our website latestly.com).