The Conjuring 3 Review: The Warrens' Scariest Case Ever Is Terrifyingly Satisfying for the Critics!

The early reviews of The Conjuring 3 are out, and gladly they happen to be positive. Critics have labeled the horror movie terrifyingly satisfying and have also lauded the direction. Check it out. 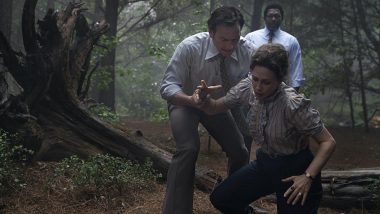 The hit horror franchise has returned with The Conjuring: The Devil Made Me Do It also called The Conjuring 3. Starring Patrick Wilson as Ed Warren and Vera Farmiga as Lorraine Warren, this is not just a horror movie, but there's more to the universe. James Wan always had bigger plans and so has he managed to win the moviegoers with his latest offering? Well, the early reviews of the film are out, and gladly they happen to be positive. Critics have labeled the scary movie terrifyingly satisfying and have also lauded the direction. Let's check out some of the top reviews below. The Conjuring 3 Will Expand the Franchise Beyond the 'Haunted House Formula', Reveals Screenwriter.

Games Radar:  "The aforementioned exorcism, in which an eight-year-old boy turned human pretzel throws spidery shapes that would make Regan MacNeil proud, is an early highlight with its flying crockery, lacerated wallpaper, and diabolical yowls."

Digital Spy: "The Conjuring: The Devil Made Me Do It's intense opening will terrify you whether you believe in demons or not. It centres on the exorcism of David Glatzel and sees director Michael Chaves unashamedly lean into The Exorcist, right down to the arrival of the priest, and it'll satisfy any horror fan."

The Hollywood News: "What has always made The Conjuring films stand out against the spin-offs within the universe, is the inclusion of Ed and Lorraine Warren. The pair, based upon the real-life monster-hunting couple, are the ever-beating heart of the franchise, and it is their love that injects the series with heart and emotion. This entry delves especially deep into their bond, even going as far as to reveal how they first met." The Conjuring - The Devil Made Me Do It Trailer: The Warrens Face Their Scariest Case Ever (Watch Video).

DVD Fever: "For me, the first two Conjuring movies in the series were fairly disappointing, so I didn’t hold out much hope for this threequel, but I was massively surprised with a kick-ass opening with 5.1 sound to give your home cinema equipment as massive workout!"

Comic Book Review: "The story is by no means bad, though, and it is admittedly refreshing to see the love story of the Warrens put front and centre. The supporting characters don’t bring a whole lot to proceedings, but Vera Farmiga and Patrick Wilson remain as superb as ever, with tonnes of chemistry and bring a level of believability to their on-screen relationship that helps get you effortlessly invested in both their story and the world this franchise inhabits."

Meanwhile, the story of the horror flick is all about terror, murder, and unknown evil that even shake Ed and Lorraine Warren. Also, going by the above reviews, it's safe to say that The Conjuring: The Devil Made Me Do It can be added to your watchlist. The movie is available is in UK cinemas now, and releases in the US theaters and HBO Max on June 4. Stay tuned!

(The above story first appeared on LatestLY on May 27, 2021 11:56 AM IST. For more news and updates on politics, world, sports, entertainment and lifestyle, log on to our website latestly.com).