Thor Love and Thunder: Chris Hemsworth, Natalie Portman, Matt Damon, Christian Bale – All The Actors Confirmed For Taika Waititi's Superhero Film And What They Will Be Playing

Thor: Love and Thunder was among Marvel's 2021 releases. However, its shooting was abrupted due to ongoing COVID-19 pandemic. The big-budget film will be co-written by Taika Waititi. 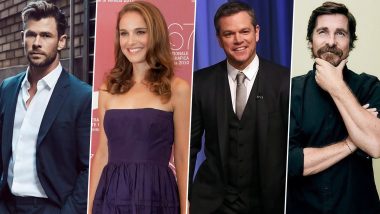 The team of Thor: Love and Thunder is finally gearing up for the shoot of the film in Australia. Matt Damon, who recently was confirmed to be a part of the film, also flew to Sydney to kickstart the shoot of the MCU film. But while the makers are trying to keep the details about the fourth instalment a secret, they make sure they share a few updates about it to keep up the excitement level amongst the fans. Director, Taika Waititi earlier talked about the romantic theme that will be seen during the film and gave us an insight into some of the characters that we will get to see in Thor: Love and Thunder. Robert Downey Jr's Tony Stark is Alive in Thor: Love and Thunder? Here's the Truth!

Chris Hemsworth will be reprising his role as the mighty Thor while Natalie Portman will return as Jane Foster. She sort of went AWOL from the Marvel Cinematic Universe after Thor: The Dark World and had a small cameo in Avengers: Endgame, but will be making a powerful return as Lady Thor this time. There are high chances that Foster will wield the hammer and support her love, God of Thunder, as they face new challenges. The film will see Portman become the first female to play the superhero Thor.

Christian Bale will be joining the cast of Thor for the fourth instalment and will be essaying the role of the villain in the film. His character Gorr the God Butcher is said to have had a tough life where he lost his family and is now out to kill gods of all sorts, such as the titular Thor. Chris Pratt will return as his Guardians of the Galaxy character Star-Lord/ Peter Quill in the film. Vin Diesel, who voices Groot, will also return for Thor: Love And Thunder. Thor: Love and Thunder is 'So Insane and Also Very Romantic', Reveals Director Taika Watiti.

Tessa Thompson will reprise her role as Valkyrie in the fourth Thor movie. The actor will be playing the first LGBTQ superhero in the flick. Jaimie Alexander will return as Sif who is a fearsome Asgardian warrior and a good friend of Thor's. Dave Bautista will revive his role as Drax the Destroyer, while Karen Gillan will be seen returning as Nebula. Taika Waititi will voice Korg in the fourth instalment while Matt Damon's character is still kept a secret.

Thor: Love and Thunder was among Marvel's 2021 releases. However, its shooting was abrupted due to ongoing COVID-19 pandemic. The big-budget film will be co-written by Taika Waititi. Jennifer Kaitlyn Robinson will assist him with writing. The film which was earlier slated to release in November 2021, is now scheduled to hit the theatres on May 6, 2022.

(The above story first appeared on LatestLY on Jan 19, 2021 07:21 PM IST. For more news and updates on politics, world, sports, entertainment and lifestyle, log on to our website latestly.com).