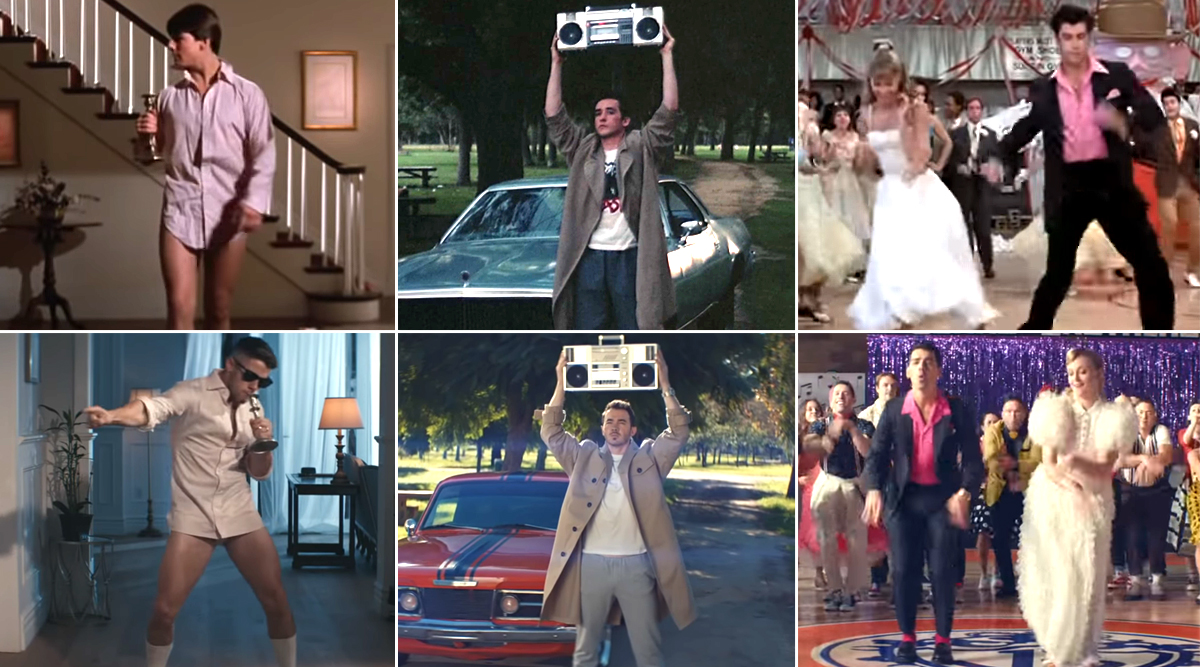 What A Man Gotta Do Vs Original (Photo Credits: YouTube)

Jonas Brothers dropped another music video today. Titled 'What A Man Gotta Do', the music video once agains features the brothers with their beautiful wives. The six of them have earlier appeared together in the music video for the comeback song, 'Sucker'. The song has a nice vibe to it, and is being loved by all. The music video is quite romantic. And just in case you did not know it pays an ode to popular Hollywood movies. All three Jonas couples appear in a three seperate romantic settings in the song. All three scenes are inspired by a Hollywood film. What A Man Gotta Do Video: Jonas Brothers and J-Sisters Reunite To Give Us a Cute Throwback of Iconic Hollywood Moments and We're Already Playing it On Loop!

Nick Jonas and Priyanka Chopra get goofy and romantic, and their pants are off. It is a scene inspired by the 1983 film, Risky Business. In the original, a very young Tom Cruise dances around his empty house without his pants.

Joe Jonas and Sophie Turner appear in a segment inspired by the hit dance film, Grease. John Trvolota featured in the song back in the year 1978. What A Man Gotta Do or Sucker: Which Song Of The Jonas Brothers Will Be Marked Favourite In Your Playlist? Vote Now.

And finally, Kevin and Danielle get the best of the three settings. The couple recreated the hit scene from Say Anything, where John Cusack stood out the window of Ione Skye with a boombox.

Check Out This Comparison Here:

What A Man Gotta Do Vs Original (Photo Credits: YouTube)

Watch The Scene From Say Anything That Inspired Kevin Jonas And Danielle's Part:

Check Out What A Man Gotta Do Here:

So, we quite loved the song for not just its musical aesthetics but also for paying a tribute to these iconic movies. Many of us have grown up watching this classics. Also, all three lead pairs share an incredible chemistry in the music video. This music video totally deserves that 'like share and subscribe' shoutout.