Rana Daggubati and Miheeka Bajaj took everyone by surprise by announcing about their relationship. Then on May 21, the couple dropped in another surprise by sharing a picture from their roka ceremony. 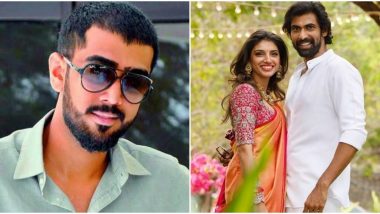 Rana Daggubati and Miheeka Bajaj took everyone by surprise by announcing about their relationship. The Baahubali fame shared a pic posing with his ladylove and revealed that she said ‘Yes’. From family to friends to fans, all started showering the couple with congratulatory messages. On May 21, the couple dropped in another surprise by sharing a picture from their roka ceremony. In presence of the family members and close pals, Rana and Miheeka had gotten engaged. And the next buzz that has been doing rounds is regarding their wedding plans. Samantha Akkineni Shares A Pic On Insta From Rana Daggubati – Miheeka Bajaj’s Roka Ceremony And It Just Cannot Be Missed!

There have been numerous rumours doing rounds regarding Rana Daggubati and Miheeka Bajaj’s wedding ceremony. Initially it was said that the couple might tie the knot next year owing to the lockdown imposed across the country in the wake of coronavirus outbreak. But ever since the duo got engaged, it has been said that the couple is planning to get hitched on August 8. But there was no official announcement. But guess what, Rana’s brother Abhiram Daggubati has dropped hints about Rana and Miheeka’s marriage. Rana Daggubati And Fiancée Miheeka Bajaj Look Their Happiest As Families Officially Finalise Pair's Engagement and Wedding Dates.

In an interview to a news channel Abhiram Daggubati opened up about Rana Daggubati and Miheeka Bajaj’s wedding plans. He was quoted as saying, “I congratulate and wish him a very married life.  I’ve known sister-in-law Miheeka Bajaj since a very long time as she is a close friend of my cousin Aashritha (Venkatesh’s daughter) the marriage might happen in August,” reports Zoom. However, we’ll have to wait for the couple or their respective families to make an official announcement on the wedding date. Stay tuned for further updates from the world of entertainment.

(The above story first appeared on LatestLY on Jun 09, 2020 09:11 AM IST. For more news and updates on politics, world, sports, entertainment and lifestyle, log on to our website latestly.com).