Ayyappanum Koshiyum to Be Remade in Hindi; Here’s How You Can Watch Late Director Sachy's Malayalam Film Online on Amazon Prime 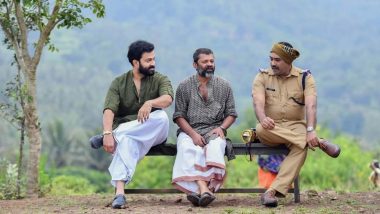 The Malayalam movie Ayyappanum Koshiyum, helmed by the late screenwriter – director Sachy, features Prithviraj Sukumaran and Biju Menon in the lead roles. It was his last project that turned out to be a hit at the box office. This successful film is also getting a remake in Hindi and its rights has been acquired by Bollywood actor-producer John Abraham. This Malayalam movie, which was released on February 7, 2020, was Sachy’s second directorial project after Anarkali, which also had Prithviraj and Biju in the lead. Sachy’s film Ayyappanum Koshiyum is now available on Amazon Prime and you can watch it right away if you haven't watched yet! Ayyappanum Koshiyum Director Sachy Passes Away at 48: Nivin Pauly, Vishnu Vishal and Netizens Express Grief Over The Tragic News (View Tweets).

There were many who rushed to watch this Malayalam film, Ayyappanum Koshiyum, the day it hit the theatres. In case you missed watching this movie in cinema halls, you could watch it right away on the streaming platform Amazon Prime Video. Yes, this film is now available online. Besides Ayyappanum Koshiyum, Sachy’s first directorial project Anarkali is also available on this OTT platform. The subscription cost of Amazon Prime is priced at Rs 999 per year. The Prime Video service can be used in smartphones, TVs and laptops. John Abraham to Remake Prithviraj Sukumaran and Biju Menon’s Malayalam Film Ayyappanum Koshiyum in Bollywood.

Watch The Trailer Of Ayyappanum Koshiyum Below:

Ayyappanum Koshiyum revolves around two men who clash against each other over a small issue. Koshy Kurien is a wealthy ex-havildar and also politically well connected. Koshy (who is drunk, seated in his car’s backseat) is on his way to Ooty with his driver via the Attappadi route where alcohol is strictly prohibited and there they come across an honest, tough sub-inspector Ayyapan Nair. The fallout between the two characters start right from here and its gets worse because of their egos . It’s an intriguing action thriller, with no hero and no villain, but just two characters who drag each other into a battle and turn things more chaotic for each other.

Talking about the Hindi remake of Ayyappanum Koshiyum, the makers are yet to announce the names of the actors who would be roped in to play the lead roles. Director Sachy breathed his last on June 18. His contributions in the world of cinema will always be cherished.

(The above story first appeared on LatestLY on May 26, 2020 03:28 PM IST. For more news and updates on politics, world, sports, entertainment and lifestyle, log on to our website latestly.com).