Bheemla Nayak, starring Pawan Kalyan and Rana Daggubati in the lead, is the upcoming Telugu movie directed by Saagar K Chandra. It is a remake of the Malayalam film Ayyappanum Koshiyum. 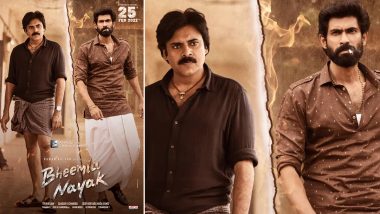 Bheemla Nayak, starring Pawan Kalyan and Rana Daggubati in the lead, is the upcoming Telugu movie directed by Saagar K Chandra. It is a remake of the Malayalam film Ayyappanum Koshiyum that starred Biju Menon and Prithviraj Sukumaran in the lead. Pawan Kalyan has stepped into Menon’s shoes, whereas Rana will be playing Prithviraj’s role from the original. There are many major releases happening in this week and Bheemla Nayak too is one among them. Bheemla Nayak: Pawan Kalyan, Rana Daggubati’s Film’s Post-Theatrical Streaming Rights Sold to Disney+ Hotstar for a Whopping Price – Reports.

The trailer of Bheemla Nayak has given a glimpse of the upcoming flick and shown it is ‘a fight between pride and self-esteem’. The audience is eagerly looking forward to watch the film on the big screens and ahead of its release, let’s check out some of its key information.

Plot – It’s about a police official who is an upright man and he always strives to do the right thing by abiding the law. But things go for a toss when he comes across a stubborn individual and then situation goes absurd due to their egos.

Watch The Trailer Of Bheemla Nayak Below:

Release Date – Bheemla Nayak is all set to hit the big screens on February 25. It will be released in Telugu language along with the Hindi dubbed version.

Review – The review of Pawan Kalyan and Rana Daggubati starrer is not yet. LatestLY will update as soon as the review of Bheemla Nayak is out.

(The above story first appeared on LatestLY on Feb 22, 2022 01:25 PM IST. For more news and updates on politics, world, sports, entertainment and lifestyle, log on to our website latestly.com).