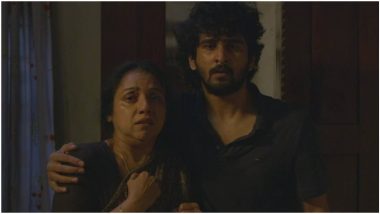 Revathy and Shane Nigam in a still from Bhoothakaalam (Photo Credit: SonyLIV)

Rahul Sadasivan's sophomore directorial Bhoothakaalam is an unusual film. Produced by actor Shane Nigam who also plays the lead, Bhoothakaalam is an intense look at the breaking down of a mother and son relationship, haunted by the ghosts of their shared past. Revathy plays the mother Asha who suffers from clinical depression, while Shane plays the son who bears the frustrations of a lack of employment and being trapped in the house with his mother, while there are references to him being once heavily addicted to alcoholism. There are also allusions that his father may have died by suicide and he could have such tendencies. Bhoothakaalam Movie Review: Revathy and Shane Nigam Star in This Well-Acted ‘Horror’ Film That Frightens You With Its Realism.

But Bhoothakaalam is not a moving drama about fractured relationships, even though that thread forms the crux. The movie smartly shuffles genres teasing you into doubting if it is a psychological thriller or a horror movie, before showing you its cards in the climax.

In this SPOILER-filled feature (there, we warned you!), we look into what happened in the climax and whether the movie showed all of its secrets.

Bhoothakaalam, from the beginning, throws hints that not all is well with the house where Asha and Vinu are staying. But it also confounds us into thinking that these strange happenings may not be real, because we are seeing them through the fractured psyche of its two leads. The granny's demise in the opening act given a hint of something sinister, but Bhoothakaalam makes us suspect slightly that maybe Asha or Vinu has a hand in her death. The finger of suspicion moves towards Vinu, because he was frustrated about taking caring of his grandmother, often in the middle of the night helping his mother change her diapers, and in doing, so he couldn't apply for a job outside his town.

The fact that it is only he who begins to observe strange going-ons in the house make us doubt if he is breaking down mentally. The interval scene is where the movie actually shows up its paranormal facet, when Vinu gets locked in his dead grandmother's room and senses someone in the bathroom. But the next day he is alive, but shaken, and like his disbelieving uncle, the movie makes us think it is all in Vinu's mind.

Asha is enveloped by the grief of losing her mother, that addled with her treatment of clinical depression and the fear of losing her teacher job. Since she is already overwhelmed by her own emotions, Asha may not have been quick to spot the spooky going-ons in her house. The strong semblance to the 2014 Australian horror The Babadook cannot be denied here.

Here's where Saiju Kurup's character comes to play. Why a counsellor for alcoholism would get into investigations of house backgrounds, I am not sure. But he provides us with the actual insight that something is not right with the house. Like with the haunted castle in Rabindranath Tagore's short story Kshudhit Pashaan, the house where Asha and Vinu stays is a hungry beast, a killer ins its own. It has been a scene of murder, suicides and near-suicides. And it is alluded that the accursed house is adding to the mental trauma that both the characters are going through. PS: Why did Kurup's character call Vinu's uncle about the house and not call Asha in the pre-climax? He has her number anyway. Couldn't figure this one out. Bhoothakaalam Movie Review: Revathy And Shane Nigam’s Performances And The Gripping Narrative Leave Critics Impressed.

Things peak when Asha decides to kill herself and her son a la Thaniyavarthanam by adding poison to the dosa batter, when the uncle decides to admit him in a psychiatric facility. This could be the house making her to do so. The outburst at the dinner table where she makes her son understand her plight by trying to stand by him all these years perhaps broke that spell. That scene made both of them see each other in a fairer light, and therefore reduce the animosity for each other. For the first time, the mother and son console each other, and therefore they exorcised the unspoken ghosts of their past.

This may be why the real ghosts of the house finally decide to bring their presence out in the open in front of Asha and Vinu. The spirits begins scaring them, and Asha, getting a respite from the grief her son has been giving, finally realises that Vinu has been saying the truth. We also realise that the crying sounds that Vinu heard earlier in the film may not be his mother, but one of the house's earlier victims. They barely manage to come out alive, but not before Vinu is terrified to see the ghostly fingers of the spooky entity on the door. I believe it is the dead granny's fingers, once again stinging our suspicion if Vinu has a hand in her death.

The final scene has Vinu and Asha moving out of the house with their belongings. Vinu's uncle still doesn't believe their story but he is glad that the mother and son have reconciled, but the counsellor is more believing of what happened. The relationship between Vinu and Asha is better now, but whether it is because of their last night conversation or because they are out of the house's curse, that is something left to our perception.

The last scene is tricky, though. After the house is emptied and the counsellor closes the door, the camera is kept static in the living room for quite a few seconds. The movie makes us expect that we would now see something supernatural, but maybe the ghost will make its presence felt.

It doesn't. It is the film once again playing with our minds and once again making us doubt whether the events in the climax are truly paranormal. Like what the uncle says, every house has problems. So was the spooky happenings manifestations of the combined grief of the residents who lived there? Or perhaps the curse has gone to rest, waiting for the next unfortunate living being to rent the house.

Have you seen Bhoothakaalam? What are your thoughts on this? Share your observations in the comments section below. Bhoothakaalam is streaming on SonyLIV.

(The above story first appeared on LatestLY on Jan 21, 2022 06:24 PM IST. For more news and updates on politics, world, sports, entertainment and lifestyle, log on to our website latestly.com).