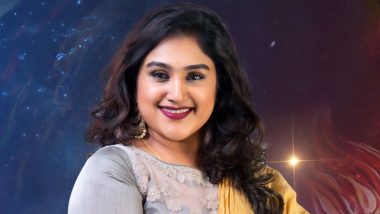 South actress Vanitha Vijayakumar is a part of the controversial reality show, Bigg Boss Tamil 3. The third season hosted by actor-politician Kamal Haasan, has been in limelight ever since the announcement of this show happened. Besides all the drama that is happening inside the Bigg Boss house, there is another hot buzz doing rounds of social media. According to reports, Vanitha might have to quit the show abruptly. Reportedly, her ex-husband Anand Rajan has filed a police complaint against the actress for kidnapping case. Bigg Boss Tamil Season 3 Full List of Contestants: Madhumitha, Kavin, Vanitha Vijayakumar to Dazzle Kamal Haasan’s Show.

As per reports, Vanitha Vijayakumar’s ex-husband Anand Rajan has lodged a complaint with the Telangana Police in February after he was not allowed to meet his daughter. He in fact registered a kidnapping case against her and now according to reports, the situation is gone out of hands. Reports also states that the Telangana police have got in touch with the Nazrethpet police station in Chennai to get the actress arrested. Bigg Boss Tamil 3 Premiere: Kamal Haasan’s Show to Go on Air Tonight on Vijay Television! See Pics.

Vanitha Vijayakumar was quoted saying, “One day, all of a sudden, my daughter called me asking me to take her back from Hyderabad. I got panicky and asked if she was safe, and she replied saying that she wasn't. I immediately took the flight to Hyderabad and got her back to Chennai. I even asked the police, not to make this a big issue,” reports Behindwoods. Vanitha and Anand Rajan got hitched in 2007 and five years later, the duo got divorced on mutual consent. Back then it was Anand who got their daughter’s custody rights and Vanitha had the right to visit. Stay tuned for further updates.

(The above story first appeared on LatestLY on Jul 03, 2019 01:01 PM IST. For more news and updates on politics, world, sports, entertainment and lifestyle, log on to our website latestly.com).