It has been confirmed that Karnan will be released in theatres worldwide. Superstar Dhaunsh is all set to conquer theatres from April 2021. 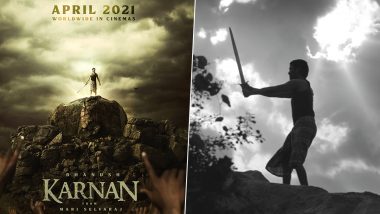 The long, long wait to know about the release of Dhanush’s film Karnan has finally come to an end! All this while fans could get a glimpse of the film through posters and working stills, but now with this teaser video, here’s is a clear look Dhanush in Karnan. It has been confirmed that Karnan will be released in theatres worldwide. Yes, superstar Dhaunsh is all set to conquer theatres from April 2021! Karnan: Dhanush’s Film Is Not Based on Kodiyankulam Caste Riots, Confirms Director Mari Selvaraj.

The makers have released a black and white teaser video. It opens to an impressive background score, a horse galloping towards a hilly area and as the video forwards, one would see Dhanush holding a sword and running towards rocky hills. He is dressed in checkered lungi and teamed it with a vest and that avatar of him is mighty impressive. The intense background score composed by Santhosh Narayanan turns into celebratory tune as the video ends with the announcement of the film’s release date and Dhanush is seen wielding the sword. Jagame Thandhiram: Dhanush’s Film To Get A Direct Release On OTT Platform?

This is indeed one of the biggest updates for all fans of Dhanush and we bet, all must be jumping with joy on finally hearing an official announcement on the theatrical release of Karnan. Directed by Mari Selvaraj, the film also features Rajisha Vijayan as the female lead. The rural drama is bankrolled by Kalaippuli S Thanu under the banner of V Creations.

(The above story first appeared on LatestLY on Jan 31, 2021 11:31 AM IST. For more news and updates on politics, world, sports, entertainment and lifestyle, log on to our website latestly.com).