After sharing the posters of his film Kurup which will hit the theatres this year, Dulquer Salmaan announces his new home production Adi, starring Shine Tom Chacko, Ahaana Krishna, Dhruvan and directed by Prasobh Vijayan 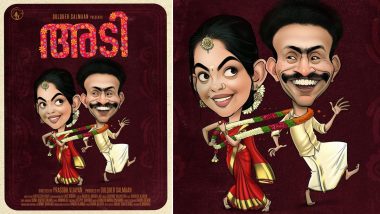 January 1, 2021, has turned out to be a day of announcements and new reveals. Sandeep Vanga revealed the teaser video of Animal with Ranbir Kapoor which also stars Anil Kapoor and Paineeti Chopra. Dulquer himself shared the new posters of his movie Kurup which has him at Gateway Of India with Sobhita Dhupliwal for company. The actor-producer has now shared the first poster of his home-production Adi which will be directed by Prasobh Vijayan. From Anushka Shetty’s Nishabdam to Dulquer Salmaan’s Maniyarayile Ashokan, 7 South Films of 2020 That Released Directly on OTT and Left Us Annoyed! (LatestLY Exclusive)

The poster is colourful and is more of character posters with the actors as cartoon characters. It will probably be a story of a reluctant groom and a determined bride. At least that's what we gathered from the poster. But it does look really quirky and could be one of the most entertaining comedy films of this year.

There were rumours that Salmaan's Kurup will be an OTT release but the poster reveals of today made it clear that that's not where this movie is headed. Cinema halls are limping; first due to no business for many months of the year and now with limited seatings and fewer footfalls. These movies have the potential to revive their fate.

(The above story first appeared on LatestLY on Jan 01, 2021 05:53 PM IST. For more news and updates on politics, world, sports, entertainment and lifestyle, log on to our website latestly.com).