Kamal Haasan 232 will be produced by Kamal Haasan himself while Anirudh Ravichander will be composing the music. The movie will be directed by Maanagaram and Kaithi filmmaker Lokesh Kanagaraj. 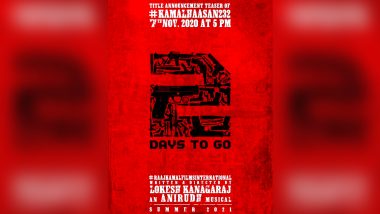 Tamil film icon Kamal Haasan rings in his 66th birthday on November 7 and the day will be nothing short of a gifted one for the actor's fans. The makers of Kamal Haasan's next, which has been tentatively titled #KamalHaasan232 or #KH232, have decided to unveil the film's original name on the actor's 66th, as a gift to his fans. Indian 2: Kamal Haasan, Shankar Give 1 Crore Each to Families of Crew Members Who Tragically Died in the Crane Accident On Set.

Kamal Haasan 'began another journey' when he announced on Spetember 16 2020 that he has begun work on his 232nd film. And now, as per trade analyst Taran Adarsh, this Lokesh Kanagaraj directorial will get its title in the next 2 days. Evanendru Ninaithaai: Kamal Haasan to Collaborate with Master Director Lokesh Kanagaraj for his 232nd Film.

TITLE ANNOUNCEMENT ON KAMAL HAASAN'S BIRTHDAY... 7 Nov 2020 marks the 66th birthday of #KamalHaasan... Raajkamal Films International to unveil the title teaser of #KH232 on the birthday at 5 pm... Directed by #LokeshKanagaraj... An #Anirudh musical. #KamalHaasan232 pic.twitter.com/GgEDwjVhGr

Kamal Haasan 232 will be produced by Kamal Haasan himself while Anirudh Ravichander will be composing the music. The movie will be directed by Maanagaram and Kaithi filmmaker Lokesh Kanagaraj. This is yet another Kamal Haasan movie that is eagerly awaited, considering Vishwaroopam 2, was the actor' last big screen release in 2018.

(The above story first appeared on LatestLY on Nov 05, 2020 06:48 PM IST. For more news and updates on politics, world, sports, entertainment and lifestyle, log on to our website latestly.com).