Maara is a Tamil remake of the Malayalam hit Charlie, starring Dulquer Salmaan and Parvathy. The remake has R Madhavan and Shraddha Srinath in the lead, while the supporting cast has Abhirami, Sshivada, Guru Somasundaram and Padmavati Rao. Maara is streaming on Amazon Prime Video. 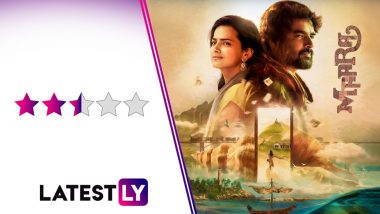 Maara Movie Review: The 2015 film Charlie, directed by Martin Prakkat, is one of my favourite Malayalam films of the last decade. It is with some trepidation that I approached its Tamil remake, Maara, directed by debutant Dhilip Kumar, and for fair reasons. Malayalam movie remakes in recent times have all turned out to be inferior in comparison, and that's not just because I have a soft corner for cinema from my mother state. Dulquer Salmaan Pens Down an Emotional Note for R Madhavan and Team Maara for Letting Him Be a Part of the Remake.

Maara, in all honesty, isn't a bad movie. If I had not watched the original, I might have even liked it. But when it comes to Charlie, to rephrase Maara's (R Madhavan) quote in the film, when you have tasted the best tea in the world, dipped in honey, why would you care for the hot-selling beverage sold around the corner? Even if it's sugary sweet?

The plotline of Maara follows Paaru (Shraddha Srinath) who leaves for Mattancherry in Kochi on pretext of a heritage restoration project, but actually wants to escape an arranged marriage alliance. There, while seeking a rental house, she finds herself in awe of some murals drawn around in a locality, that has a connection to her childhood.

Paaru becomes fascinated with their painter, the vagrant Maara, whose house she begins to stay in. Even though she has not met Maara and has only talked to him once on phone, Paaru gets curiouser about him by the day, and seeks out everyone whose lives he has touched in the past to get a better picture of him.

I had read somewhere that the makers of Maara wanted to make it different from Charlie in its treatment. The opening sequence, where a kind lady (Padmavati Rao) tells a story of a warrior who hid his soul in a fish to a young Paaru, followed by an animation sequence, held that promise. That story later lends itself to a beautiful sequence of an adult Paaru rediscovering it through Maara's paintings in Mattancherry. With Ghibran's mellifluous score adding to the magic of this sequence, I was actually getting to like where this remake was heading. And then, the obvious happened...

From thereon, Maara begins to tread through the familiar footsteps of Charlie, and yet couldn't just bring the same kind of impact the original did. The one different thing it does - the tale of that warrior - does return to play its part in bringing a differently done conclusion to the story, though I cannot say it is a positive. Otherwise, Maara sort of becomes a pale reflection of Charlie's imposing aura, where every similar scene feels weaker in comparison.

Like for example, remember the most affecting scene in Charlie, involving a HIV-infected prostitute, played by the late Kalpana? The scene is extremely well-acted by both Kalpana and Dulquer, and leaves you shocked in the end by how it turns out. Here, the same scene, this time the character being played Abhirami, just plays along the beats but offers little in terms of emotions. Forget that, you can see the paucity in magic in how terrifically "Akale" song sequence is shot in Charlie, and compare it to how "Yaar Azhaippadhu" (beautifully composed, though) is shot in Maara. The additional comic bits are just annoying. Maara Song Oru Arai Unathu: This Madhavan And Shraddha Srinath Track Is The Perfect Remedy To Get Over Monday Blues.

Perhaps, the biggest victims of the remake are the lead characters themselves. Gone is the fierce independent streak that marked Parvathy's character in the original, here Shraddha Srinath's Paaru can't evolve beyond a PYT seeking fanboy aspirations. The subplot of her family coaxing her for a marriage is conveniently forgotten in the latter portions, thus leaving less scope for her to develop better as a character.

Similarly the bohemian spirit that made Dulquer's Charlie such a fascinating character is never explored much in Madhavan's Maara. At times, he feels more like an overgrown boy running away from responsibilities. The final act of Charlie turns plate as the narrative shifts perception view, and we see Charlie now seeking Tessa and end up meeting her in a memorable finale at Thrissur Pooram. In Maara, what we get is a very limp reunion. The most irksome part is that Charlie is only about 129 minutes, whereas Maara adds 20 more minutes and still feels weaker.

Where the remake feels good is in the music, the cinematography and the supporting cast. Among the supporting players, Guru Somasundaram, Moulee and Sshivada leave their mark with fine acts. As for the main leads, both Madhavan and Shraddha Srinath are good enough, but they find it hard to follow up on two great acts from the original film.

- The Main Characters Are Not Well-Developed

As someone who was in awe of Charlie, I was let down by Maara's attempt to create the same magic for tamil audience. While its effort to do something different had a spark, that hope is lost when the film borrows the same beats and then come out inferior in the process. Maara is streaming on Amazon Prime Video.

(The above story first appeared on LatestLY on Jan 08, 2021 02:59 PM IST. For more news and updates on politics, world, sports, entertainment and lifestyle, log on to our website latestly.com).