Mani Ratnam and Dulquer Salmaan to Collaborate for Roja Sequel?

A report suggested that the director was indeed planning a sequel to his 1992 release that starred Aravind Swami and Madhoo and wanted to cast Dulquer Salmaan in the same. 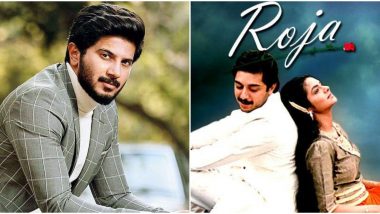 Roja directed by Mani Ratnam is still considered as classic and we wonder if the director would want to play with it in any way. While the idea to revisit his classic after so many years sounds promising, it's still a risky deal but there were reports and we can't deny them. Apparently, a report suggested that the director was indeed planning a sequel to his 1992 release that starred Aravind Swami and Madhoo and wanted to cast Dulquer Salmaan in the same. However, his team has issued a clarification saying it's a mere rumour and there are no such plans whatsoever. Ponniyin Selvan Movie Poster: Mani Ratnam's Magnum Opus Promises To Be The Beginning Of The Golden Era On Screen (See Pic).

As per new reports in The Hindu Tamil, the director's team has denied the story completely while saying that he has no such plans. They also clarified that Ratnam is currently busy with his period saga, a multi-starrer, Ponniyin Selvan and he won't take up a new project before he wraps his ongoing one. So, yes, Dulquer's fans will have to wait a bit longer to see him work with an ace director like Mani Ratnam. Ponniyin Selvan: Here's Why Amala Paul Rejected Mani Ratnam's Magnum Opus.

Meanwhile, the director has planned a long schedule for Ponniyin Selvan that would help them retain the film's original release date in 2021. Apparently, the film will be shot in one-go once they resume the shooting. The movie has a stellar star cast of Aishwarya Rai Bachchan, Vikram, Karthi, Jayam Ravi and Aishwarya Lekshmi.

(The above story first appeared on LatestLY on Jun 04, 2020 06:41 PM IST. For more news and updates on politics, world, sports, entertainment and lifestyle, log on to our website latestly.com).