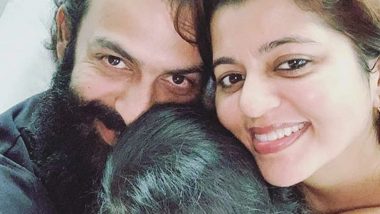 Malayalam star Prithviraj Sukumaran, who recently tested negative for COVID-19, has finally reunited with his family. Prithviraj took to Instagram to share a family photograph. In the image he is seen posing with wife Supriya and their daughter Alankrita. The actor, who has completed institutional quarantine, captioned the image: "Reunited". Actor Dulquer Salmaan took to the comment section and wrote: "Awww ! Lots of love you guys." Prithviraj Sukumaran Starrer Aadujeevitham’s Crew Member Tests Positive For COVID-19

Actor Tovino Thomas dropped heart emojis in the comment section. Prithviraj recently shared the results of his test reports on the photo-sharing website. The image showed that the samples were taken through a nasal swab. Prithviraj and director Blessy, along with a 58-member entourage of their upcoming film "Aadujeevitham", were stranded at a desert camp in Jordan since March 12 due to global COVID-19 outbreak. Prithviraj Sukumaran Voluntarily Gets Tested For COVID-19 and the Result Is Negative, Malayalam Actor Shares Test Report on Social Media.

Prithviraj Sukumaran Is Finally Back to His Family

In May, the actor returned to the country after which he was in quarantine. Earlier this year, Prithiviraj starred in the blockbuster "Ayyappanum Koshiyum" directed by Sachy. The film also stars Biju Menon. It released in February. A Hindi remake of the film is in works. Bollywood star John Abraham will be bankrolling the project. The story of the thriller revolves around the dispute between an influential havaldar and a police inspector.

(The above story first appeared on LatestLY on Jun 05, 2020 08:01 PM IST. For more news and updates on politics, world, sports, entertainment and lifestyle, log on to our website latestly.com).