Pushpa: The Shooting of Allu Arjun's Next Comes to a Halt after Some Crew Members Showed Symptoms of COVID-19?

While the director didn't waste any time in calling off the shoot, there's no update on when can we expect it to resume. 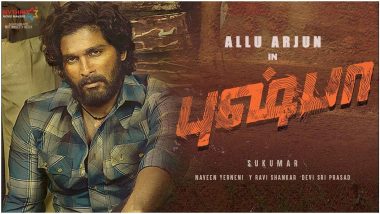 After the massive success of Ala Vaikunthpurramuloo, Allu Arjun didn't waste any time before signing his next outing. The actor is now collaborating with director Sukumar for Pushpa and the shooting of which is currently going on in Maredumilli forests, Andhra Pradesh. The shooting was earlier halted after the outbreak of COVID-19 in the country but was resumed in the month of November when restrictions had eased down considerably. However, a recent report suggests that the shooting is temporary halted after some crew members developed symptoms of coronavirus.

As per reports in Tollywood.net, director Sukumar decided to stall the shooting after some of his crew members started showing COVID-19 symptoms. While the director didn't waste any time in calling off the shoot, there's no update on when can we expect it to resume. The story revolves around the Red Sandalwood smuggling and the actor plays the role of Pushpa Raj. Rashmika Mandanna has been roped in as the female lead. Allu Arjun to Take a Pay Cut for Pushpa?

There are also reports that Arya has been roped in to play a key role in the movie. The same role was earlier offered to Vijay Sethupathi but he couldn't take it up due to some date issues. An official announcement on Arya's inclusion is awaited. Meanwhile, Allu Arjun was clicked at the airport recently and reports suggest he was on his way to start working on Pushpa's next schedule. Hopefully, things are all fine on the sets and the team can resume shooting at the earliest.

(The above story first appeared on LatestLY on Dec 03, 2020 10:06 AM IST. For more news and updates on politics, world, sports, entertainment and lifestyle, log on to our website latestly.com).