Ram Charan–Jr NTR’s RRR, Prabhas’ Radhe Shyam, Pawan Kalyan’s Bheemla Nayak To CLASH in January 2022; Which Film Will Be The Biggest Hit At The Box Office? 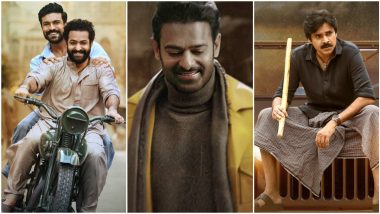 Movie buffs are going to be in for a treat during in the beginning of next year. Three major releases featuring the biggest superstars of South Cinema! And not just that, it would also mark the biggest clash at the box office. The three big films releasing in January 2022 are SS Rajamouli directorial RRR, Radha Krishna Kumar’s film Radhe Shyam and Saagar K Chandra’s Bheemla Nayak. Gangubai Kathiawadi To Not Clash With RRR; Alia Bhatt Starrer To Release On February 18, 2022.

RRR is slated to hit the theatres on January 7, Bheemla Nayak on January 12 and Radhe Shyam on January 14. The last two are coinciding with the festival Sankranthi. Fans are thrilled already about these films releasing worldwide and have started to predict which one will be the biggest hit at the box office. Confirmed! Bheemla Nayak, Pawan Kalyan And Rana Daggubati Starrer, To Release In Theatres On January 12, 2022.

The Pawan Kalyan and Rana Daggubatti starrer is a remake of the Malayalam film Ayyappanum Koshiyum. Nithya Menen and Samyuktha Menon will be seen as the female leads in the film bankrolled by Suryadevara Naga Vamsi.

Prabhas and Pooja Hegde’s chemistry have won audiences’ hearts already. The romantic drama set in 1970’s Europe is produced under the banners of T-Series Films and UV Creations.

Which Film Will Be The Biggest Hit At The Box Office?

(The above story first appeared on LatestLY on Nov 16, 2021 03:15 PM IST. For more news and updates on politics, world, sports, entertainment and lifestyle, log on to our website latestly.com).