Rashmika Mandanna’s Mother Opens Up About Her Daughter’s Breakup With Rakshit Shetty, Says “We Are Disturbed”

Rashmika Mandanna and Rakshit Shetty have called off their engagement. 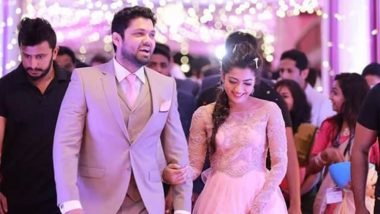 Breakups are never easy. Celebrity breakups even tougher. The entire nation talks about the couple [arting ways with their morning tea. The latest couple who has opened floodgates of headlines by hitting the road to splitsville is Rashmika Mandanna and Rakshit Shetty. As per reports, the two have called off their engagement, after celebrating their one year anniversary earlier. While there is no official statement, Rashmika is said to have decided to focus on her film career instead. Now, Rashmika's mother has opened up about the split. Rashmika Mandanna Calls Off Her Engagement With Rakshit Shetty; This Is Why the Couple Broke Up.

While talking to a local TV channel, Suman Mandanna, gave us the details of how life is moving forward. A popular entertainment website quoted Rashmika's mother as saying, "We are disturbed and on the path to recovery. For every individual, their life comes first. Nobody likes to hurt each other and everybody should be happy."

Earlier, a news daily had reported on deets about the breakup. They quoted a source, "Rashmika made the decision after consulting with her parents, family elders and friends. It was a tough decision to make, but she is showing a lot of character in overcoming this personal and emotional setback."Rashmika has also decided to focus on her career as of now.

The source had also added, "She has been receiving some exciting offers in Telugu and Kannada, and wants to cement her place in both the industries."

Rashmika Mandanna was last seen in the movie Geetha Govindam. In the future, she will be seen in Nani and Nagarjuna's Devadas. She will also be seen playing a cricketer in one of her next projects, Comrade.

(The above story first appeared on LatestLY on Sep 12, 2018 08:51 AM IST. For more news and updates on politics, world, sports, entertainment and lifestyle, log on to our website latestly.com).