Siddharth Slams Twitterati for Clashing Trends - #UnrivalledTamilActors vs #TeluguRealHeroes; Says, ‘Our Country Really Needs These Youngsters To Do More With Their Lives’ 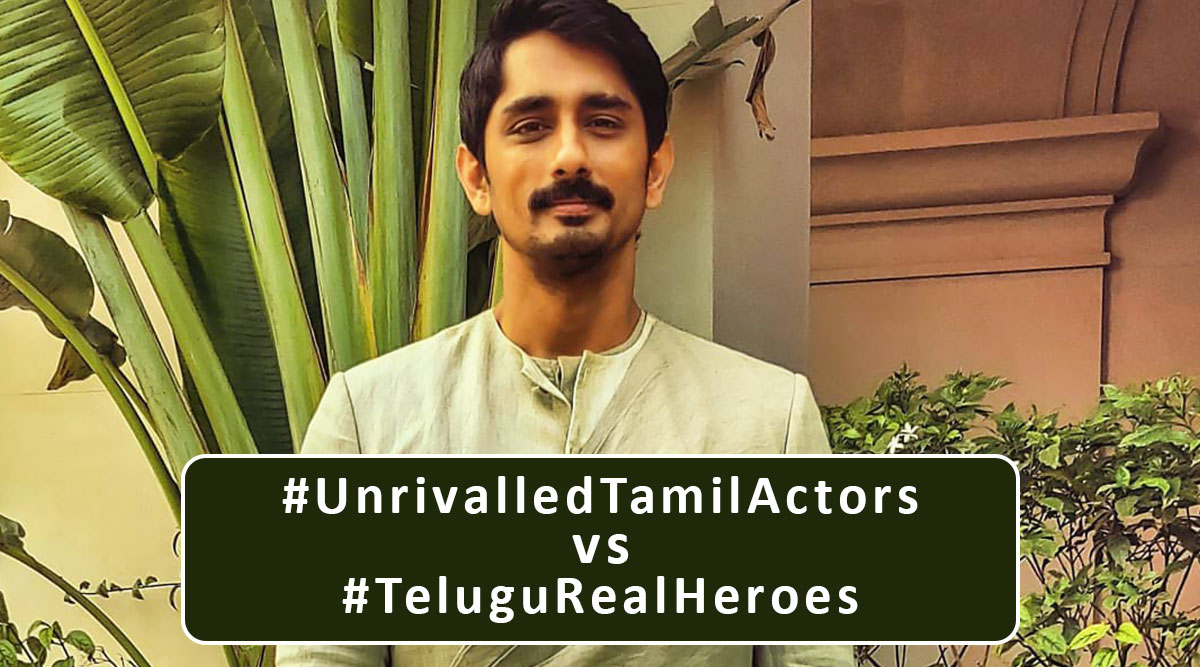 South actor Siddharth has never shied away from voicing his opinions, whether it is any issues happening in the country or any other social issues. We have seen how he has been a vocal critic of the ruling government. He boldly expressed his disappointment over the recently amended Citizenship Act, and also joined the hundreds of students in the anti-CAA protests. The actor has never been worried how his political views could hamper his career. This time the actor seems to be disappointed seeing how Twitterati are clashing trends - #UnrivalledTamilActors vs #TeluguRealHeroes. Anti-CAA Protest: Tamil Nadu Police Files Case Against South Actor Siddharth, Musician TM Krishna and Others for Protesting Against Citizenship Act.

This is not the first time that fan clubs (south cinema) are pitting films or actors against each other. We have often seen how Vijay fans and Ajith fans have a tough war of words and memes against each other and try to put their respective favourite actors at the top. This time the fans of Kollywood and Tollywood are busy proving which industry’s actors are the best and to prove the same, they are using the hashtags - UnrivalledTamilActors and #TeluguRealHeroes. Siddharth is not impressed to see fans clashing such trends on Twitter. He tweeted, “Today’s #Paithyam challenge in South Indian fans clashing trends is  #UnrivalledTamilActors vs #TeluguRealHeroes What a waste of the internet! Our country really needs these youngsters to do more with their lives, and their internet data!” Violence in JNU: Nivin Pauly, Siddharth and Other South Celebs React On the Attack at Jawaharlal Nehru University Campus.

What a waste of the internet! Our country really needs these youngsters to do more with their lives, and their internet data!

And Here’s What Twitterati Are Upto:

I'm Proud to Say.. Our Kollywood Cinema Has Some Talented Actors Who Can Act Best than Any Other Actor !!

Is There Any Videos To Compare To This At Telugu Side😂

Tamil Cinema is the actual Biggest Movie Industry in India.

Telugu Industry is nothing without SS Rajmouli sir and Billingual Film. It’s a fact.

The Most Celebrated Actors are from Tamil Industry. #UnrivalledTamilActors

The Biggies Of Kollywood

The Battle Will Never End

Most Number Of Oscar Nomination of Indian Cinema

Most Number Of National Awards in Indian Cinema

Most Number Of filmfare Awards in Indian Cinema

Oops..Someone Hit Back At Siddharth

Some of them have dropped comments on how the Tollywood fans started trolling Thalapathy Vijay, Dhanush and hence the war on Twitter started. Whilst some Twitterati claimed that Kollywood fans are to be blamed as they are the ones who started to troll Daggubati Venkatesh and others. We wonder what’s next these Twitterati are going to come up with.