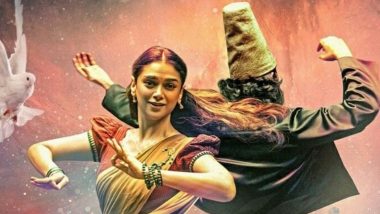 The much-awaited film Sufiyum Sujatayum has finally released on Amazon Prime Video. It is the first ever Malayalam film to get a direct web release. Starring Jayasurya, Aditi Rao Hydari and debutant Dev Mohan in the lead, this musical love tale has opened to mixed reviews. But what has been loved by everyone is the lead actress’ performance. Some have described it as a slow pace film and many others have said it to be a predictable one. But the performances of the star cast have been showered with praises. Sufiyum Sujatayum Movie Review: Mouna Ragam-Meets-Ennu Ninte Moideen in Aditi Rao Hydari and Jayasurya’s Film That Lacks the Brilliance of Neither!

Aditi Rao Hydari has played the character named Sujata, who is speech-impaired. She is an angelic beauty, who has expressed all her emotions beautifully. Her character, who has been raised in a traditional upper-caste family, the Namboothiris, falls in love with a Sufi saint, played by Dev Mohan. The audience is impressed with their chemistry, but the script was too weak and had a predictable ‘love jihad’ angle. Let’s take a look at some of the some reviews shared by Twitterati. Sufiyum Sujatayum to Premiere on Amazon Prime on July 3! Here’s All You Need to Know about Jayasurya and Aditi Rao Hydari Starrer.

A new revolution for Mollywood 🤩

Aditi Has Returned To Malayalam Cinema With A Bang

Story is about a married woman who doesnt move out from her past love!Sufi & music are impressive. Aditi steals d show. Love between sufi & aditi lacks the depth, screenplay could hv been better as plot has already lot of scope!

Watchable First Half Followed By A Tiring Second Half , #AditiRao Steals The Show Supported By Excellent Music By #Jayachandran. #Jayasurya Extended Cameo

Give It A Try Considering A Direct OTT Release ✌️

Screenplay could be made even better ! !

Thumbs Up For The Music As Well

#SufiyumSujatayum - Gud 1st half followed by a very average 2nd half where the screenplay struggles. Aditi Rao shines out with a superb performance 👏🙏

Dev Mohan & Jayasurya does their part well. Final 45 mins could have been better to make an impact. Music👌

All Hearts For Aditi As Sujata

When Eyes can Emote, Dance Smile and Express so Beautifully, why need a Voice..!!! That’s @aditiraohydari ...!!! Fab n so Beautiful ... Its Beyond Words..!!!! #SufiyumSujatayum @PrimeVideoIN #AditiRaoHydari

(The above story first appeared on LatestLY on Jul 03, 2020 10:52 AM IST. For more news and updates on politics, world, sports, entertainment and lifestyle, log on to our website latestly.com).