Tanu Balak On Shooting Cold Case During Pandemic: We Didn't Have Any Problem, We Had All Protocols In Place

Cold Case stars Prithviraj as a cop and Adithi Balan as an investigative journalist who probes death in different ways, only to discover the incident could have a supernatural undercurrent. Director Tanu Balak describes how it was shooting the film during the pandemic. 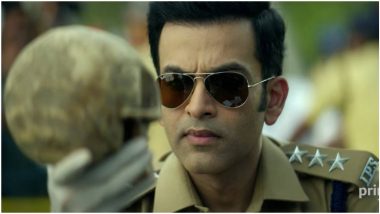 Ace cinematographer Tanu Balak, who makes his directorial debut with the Malayalam investigative thriller Cold Case, says they ensured adequate homework was done to make the probe procedure on screen seem real. Cold Case: Did Trailer of Prithviraj Sukumaran’s Murder Mystery Reveal Who the Killer Is? This Viral Fan Theory Claims So!

"It's a very fast-paced movie and there is no lag in it. People will be engaged in every manner. We did homework to make the investigation look real," he tells IANS. Cold Case stars Prithviraj as a cop and Adithi Balan as an investigative journalist who probes death in different ways, only to discover the incident could have a supernatural undercurrent.

"Prithviraj came into this movie because he had an interest in the film. It was very comfortable to work with him," says Tanu, of working with the Malayalam star.

Talking to IANS about shooting the film, he says: "It was a difficult task to shoot during the pandemic. We did all the introduction scenes first because it was safe that way, and the crowd shots at the end of the schedule."

He recalls: "We had accommodated the crew in one portal. The characters took off their masks because they had to give the shots, otherwise, everyone wore masks all the time. We didn't have any problem, we had all the protocols in place."

The film, which will stream on Amazon Prime Video from June 30.

(The above story first appeared on LatestLY on Jun 28, 2021 12:44 PM IST. For more news and updates on politics, world, sports, entertainment and lifestyle, log on to our website latestly.com).