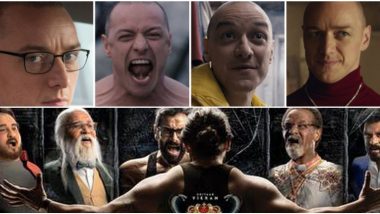 Amid the upcoming South releases, Vikram's Cobra is garnering attention the most. The film's first look was captivating enough and seeing Vikram's many avatars was a big treat for all his fans. While its shooting was going on in full swing, it got halted after coronavirus scare in the country and filmmaker Ajay Gnanamuthu is now itching to go back on the sets. For the ones who don't know, social media was buzzing with the news of Cobra being inspired by James McAvoy's Split. While we aren't aware of the former's storyline, the multiple avatars in it bore resemblances to Split. But is it really inspired by Hollywood's 2016 release? Vikram Is Not Quitting Acting, The Cobra Actor's Team Confirms.

Recently when the director conducted a QnA session on his Instagram, a fan asked him if Split is indeed the inspiration behind Cobra. Gnanamuthu immediately shrugged off the possibility by saying, "Not even close!! That much I know!!" Well, there goes your answer. While M. Night Shyamalan's directorial was a big hit and was even critically acclaimed, the film shares no similarities with Cobra whatsoever. Probably the multiple looks are his makeovers and not different characters like in McAvoy's movie where he suffered from dissociative identity disorder and had 23 alter egos. Coronavirus Pandemic: Chiyaan Vikram's Cobra Shoot Comes To a Halt in Russia Due To Indian Government's Travel Ban.

Giving an update on the film's remaining shoot, the director clarified they still have about 30% shooting left and are thinking about resuming the production very soon. Revealing if his movie will release on OTT directly, he denied it saying that the film is made for a theatre experience and won't release on digital directly.

(The above story first appeared on LatestLY on Jul 02, 2020 11:30 AM IST. For more news and updates on politics, world, sports, entertainment and lifestyle, log on to our website latestly.com).