This week has some awesome and super exciting film releases in big screens across languages Hindi, Telugu, Tamil, Malayalam, Kannada and many more. Let's quickly take a complete look at the films releasing in the theatres this week. 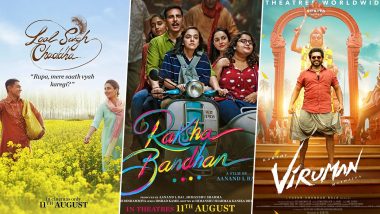 We are stepping on to the second week of August 2022 and with that there are many movies lined up for release in silver screens. This week have releases across languages like Hindi, Telugu, Kannada, Tamil, Malayalam and many more. Talking about the biggest release of the week it would be Laal Singh Chaddha, which is all set to release in theatres on August 11. The synopsis of the movie reads, "Events in India's history unfold through the perspective of Laal Singh Chaddha, a dim-witted man who has a great understanding of emotions." The comedy-drama stars Aamir Khan, Kareena Kapoor Khan, Naga Chaitanya and Mona Singh in key roles. Laal Singh Chaddha Trailer: Aamir Khan, Kareena Kapoor Khan Promise a Roller-Coaster Ride in This Forrest Gump’s Hindi Remake (Watch Video).

Another interesting release of the week would be Raksha Bandhan, the flick will open in cinemas on the same day August 11. Helmed by Aanand L Rai, the family drama stars Akshay Kumar, Bhumi Pednekar, Sadia Khateeb, Sahejmeen Kaur, Smrithi Srikanth and Deepika Khanna. The film will showcase the bonding between brother and sisters. Apart from that, Viruman is set to hit the big screens on August 12. The Tamil masala entertainer stars Karthi, Aditi Shankar in key roles and Rajkiran, Prakash Raj, Soori, Karunas, Vadivukkarasi and Saranya Ponvannan in supporting roles. Viruman Trailer: Karthi, Aditi Shankar, Prakash Raj, Rajkiran’s Film Produced by Suriya Promises To Be a Mass Entertainer (Watch Video).

(The above story first appeared on LatestLY on Aug 09, 2022 05:00 PM IST. For more news and updates on politics, world, sports, entertainment and lifestyle, log on to our website latestly.com).