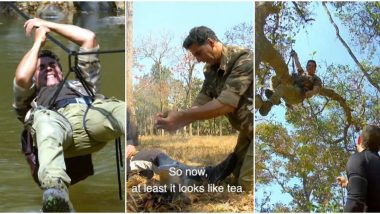 5 Things We Get to See Akshay Kumar do in His Special Into the Wild With Bear Grylls Episode (Photo Credit: Twitter)

Akshay Kumar became the third Indian celebrity to make an appearance in the popular nature adventure show, Into the Wild With Bear Grylls. The series hosted by the popular adventurer, Bear Grylls, is streaming on Discovery Plus app. The show has Bear Grylls take a popular celebrity, who could be a politician or an actor, across a series of tasks in a jungle, while also knowing more about his guest. In the past, we had seen him interact with Prime Minister Narendra Modi and Tamil superstar Rajinikanth. Into the Wild With Bear Grylls and Rajinikanth Review: Getting Closer to the Real Thalaiva Is More Exciting Than the Adventure.

Akshay Kumar special episode was themed more in army style, maybe to suit the superstar's inclination towards the Indian Forces. Why we even get to see Akshay in military cargoes. He also promotes his Bharat Ke Veer initiative, while revealing his own army history (his father was in the army). We also get to see him promote Ayurveda, by treating Bear to a ladoo made of apricot's tree gum. He also warned, through an amusing anecdote, that you should not consumer more than one ladoo. Or you will shat blood!

As for what Akshay gets to do in the episode, he and Bear get dropped in the middle of the forest, where they have to traverse across the bushes to reach a river and cross it to reach the extraction point.

In the process, we get to see Akshay a series of tasks, that we have mentioned below.

To understand which direction they need to go, Bear asks Akshay to climb a tall tree to reach the top and check out where the river is. With the help of a harness and wifey Twinkle Khanna's video message motivation, Akshay climbs the tree and finds where the river is. Into The Wild With Bear Grylls: Akshay Kumar Suffered Bruise in the Jungle While Climbing Rope Ladder at the Extraction Point. 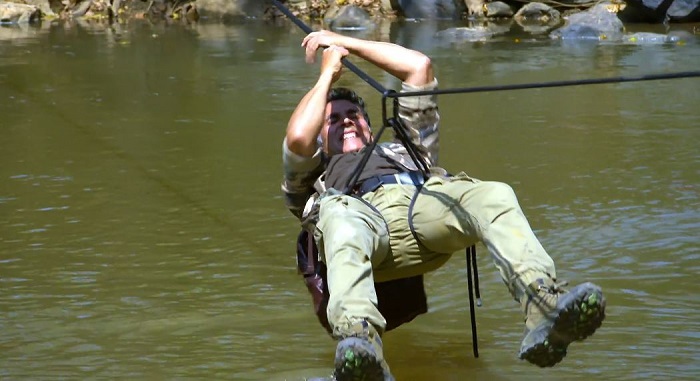 The next stunt we get to see Akshay do is rapelling across a river with the help of a rope tied across the opposite banks. Of course, we never get to see who tied the rope at the other end of the bank for both Bear and Akshay to rappel across. The river is said to be infested with crocodiles, and the show gives some closeups of the reptile. But we are pretty sure that none of them are in the area where they were rappelling. 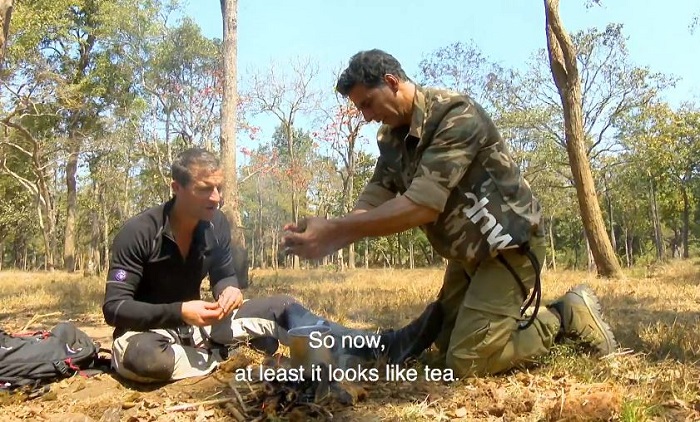 In the special Instagram Live session, Akshay talked about drinking elephant poo tea. That did happen. After they cross the river, Bear and Akshay come across elephant dung. They use the dry ones to light a fire, and the wet ones to make 'elephant poo tea'. Akshay gets to squeeze a rather 'juicy', in Bear's words, dung to make the tea. Of course, the beverage may look like tea, but doesn't look either appealing or tasty. Credit to Akki to try it out, that could be his best stunt in the episode! Akshay Kumar Consumes Cow Urine Daily For Ayurvedic Reasons (Watch Video).

Crossing River Again But Without The Rope 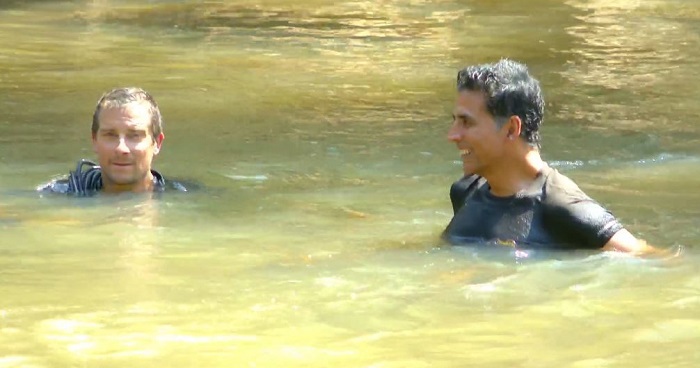 Once again, Akshay and Bear come across the river again, but here the crocodiles are there to give them company. Instead, there is a herd of elephants near the bank. While they looked docile, Bear advised they still have to be careful, so they stealthily sneaked across the river, with no harness this time.

The final point of their adventure has Akshay needed to get to a bridge where a truck is waiting for them. Akshay is made to climb a rope ladder to reach the top, which is perhaps, a cake walk for the actor, whom we had once seen travelling on top of a plane!

While Akshay is charming as usual in the episode and we did get to see him drink elephant poo tea, it is a very mellow episode for someone who we have seen perform high risk stunts in the past. Into the Wild With Bear Grylls and Akshay Kumar is streaming on Discovery Plus app.

(The above story first appeared on LatestLY on Sep 11, 2020 07:47 PM IST. For more news and updates on politics, world, sports, entertainment and lifestyle, log on to our website latestly.com).