Devoleena Bhattacharjee didn't really take Salman Khan's remark about being voted out last season due to less votes despite having a huge following. 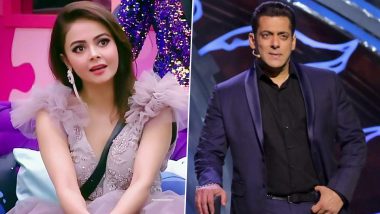 Bigg Boss 14 has been on for a while now and so far, the season has been quite civil, a word you don't really associate with this reality TV show. While people inside the house are creating a few controversies, some of the ex-contestants who aren't part of this season, are keeping the fire alive outside the house. Devoleena Bhattacharjee who had joined the show in the last season, took to Twitter to react to something that Salman Khan said in last Sunday's episode regarding Rashami Desai and her getting evicted due to fewer votes. Devoleena roars, "Mujhe Gussa Mat Dilao, Bigg Boss." Bigg Boss 14 November 13 Episode Highlights: Eijaz Khan – Pavitra Punia’s Mushy Romance, Abhinav Shukla – Rubina Dilaik Entering the Cage, 5 Highlights of BB 14

Salman Khan, during the eviction of Shardul Pandit last night, had asked the contestants to not take eliminations lightly. To add meat to his statement, he cited an example of last season where apparently both Rashami Desai and Devoleena were evicted despite being very popular and having a lot of fans This didn't really go well with Devoleena.

And not to forget ever that i am the first & only Queen of @BiggBoss till now..😍😍 Isiliye bata rahi hun gussa mat dilaana mujhe😃😃 #BB14

Salman Khan, in one of his sermons to the contestants, said, "You think that your fans are there and woh aapko bacha lenge they will save you). Aisa nahi hota, bhai (It does not work like that). You will have to earn your fans at every given point in time." Not that we disagree with him but it does make us wonder who is talking without a fact-check here.

(The above story first appeared on LatestLY on Nov 16, 2020 03:41 PM IST. For more news and updates on politics, world, sports, entertainment and lifestyle, log on to our website latestly.com).