Jaan Kumar Sanu's mother Rita Bhattacharya has reacted to her son's comment about finding Marath language irritating. Jaan's comments were not appreciated by the MNS who threatened to end Jaan's career. 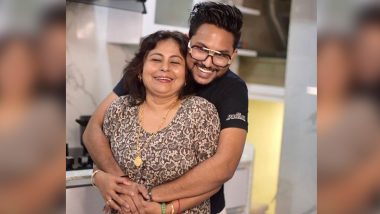 Kumar Sanu's son and Bigg Boss 14 contestant Jaan Kumar Sanu is in the news once again. While he was not to blame for when his ex-friend Rahul Vaidya called him a product of 'nepotism', the second time Jaan's comment about finding Marathi language irritating has now gained media attention and also that of MNS. The political party already issues a video demanding Jaan apologise or else they will shut the shoot of Bigg Boss 14 and also make sure Jaan's career does not move forward in Mumbai. And now, speaking to Mumbai Mirror, Jaan's mother Rita Bhattacharya had this to say. Bigg Boss 14: Jaan Kumar Sanu Gets Threatened By MNS Film Division President Ameya Khopkar For His Comment on Marathi Language (View Tweets).

"The 'Marathi' angle is being raked up unnecessarily. I have been staying in Maharashtra for the past 35 years. My husband Kumar Sanu became the legend he is today by working in this state. My children were born and brought up in this state. Maharashtra is my motherland, my state, then why is an issue being made because of the language?" questioned Jaan's Mother. Bigg Boss 14: Colors Issues Apology After Jaan Kumar Sanu's Remark on Marathi Language Spark an Outrage.

Explaining her son's statement, she continued, "Whatever Jaan said regarding speaking in Marathi did not mean that he has a problem with the language. He was irked because he thought that Rahul and Nikki were gossiping him in Marathi and that was the reason behind his outburst."

She also went on to state that she knew the late Balasaheb Thackeray and also his son Uddhav Thackeray and that she has maintained a healthy relationship with both of them. Rita also revealed that she is ready to apologise to the citizens of Maharashtra if they do not find her explanation satisfactory.

Talking about the same to ETimes TV, Jaan's mother stated, "The clip which is being talked about where Nikki Tamboli and Rahul Vaidya are talking to Marathi and Jaan simply asked her to stop talking in that language because he did not understand the language. Also, they were fighting throughout the day and he must have felt that they were gossiping about him and because he should not understand they are taking help of Marathi. I want to request everyone to consider the situation and not go by words."

"What Jaan did is a very small thing and please don't create an issue over it. Jaan can never and will never insult the language. It is my humble request to everyone that when nobody stood by him for the nepotism remark when he was insulted in front of the entire country and world by Rahul Vaidya so why are we making an issue over such a small thing. That time my son fought his own battle and I am once again saying we love and respect the state and the Marathi language and culture," she concluded.

(The above story first appeared on LatestLY on Oct 28, 2020 09:40 PM IST. For more news and updates on politics, world, sports, entertainment and lifestyle, log on to our website latestly.com).