Bigg Boss 14: Kavita Kaushik's Husband Ronnit Biswas Reveals His Relatives In Law-Enforcement Have Approached Him To File A Complaint Against Aly Goni For His Violent Behaviour

A recent Bigg Boss 14 episode saw Aly Goni lose his s**t on captain Kavita Kaushik when she takes away his personal items as a punishment from stealing juice bottles meant only for the captain. Kavita said to Aly, "mai teri baap hun", which irked him to no end and tempers flew. 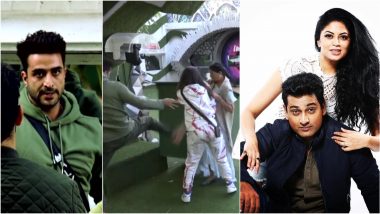 A recent Bigg Boss 14 episode saw Aly Goni lose his s**t on captain Kavita Kaushik when she takes away his personal items as a punishment from stealing juice bottles meant only for the captain. Kavita said to Aly, "mai teri baap hun", which irked him to no end and tempers flew. In a fit of rage, Aly kicked a trash bin which hurt Kavita, who was standing close to it and the houe erupted in chaos. Talking about his wife battling chaos almost daily in the house, Kavita's hubby Ronnit Biswas said, "Physical violence was never a thing which we had signed up for whether it happened directly or indirectly it doesn't matter." Bigg Boss 14: Captain Kavita Kaushik Demands Aly Goni’s Eviction After He Gets Aggressive and Violent With Her (Watch Video).

"I had seen the promo first, day before yesterday and I was very disturbed. But once I saw the way Kavita was putting up to it and how she was behaving I felt extremely proud of her. My sadness disappeared and I got happy thinking that no matter how much you try to target this girl, she will not bow down to anyone. She will come out shining and strong," said a proud Ronnit in a conversation with ETimes TV. Bigg Boss 14 November 24 Episode: Aly Goni Pays a Huge Prize for Getting Violent Towards Captain Kavita Kaushik – 6 Highlights of BB 14.

He also went on to say that what Kavita said to Aly was not a big deal. Stating that Aly also said the same line to Kavita thrice, Ronnit revealed, "He has also said this to her thrice after that. So, I think the topic should have ended then and there itself. But I understand most of the housemates know that Kavita is quite strong and if they fight with her or corner her, they will get some footage. It is very sad that in a country where we keep talking about women are equal to men, we worship Goddess, we celebrate women and talk about women empowerment, there is a man who is threatening a woman on national television that he will make her life a living hell or won't let her sleep (main iska jeena haram kar doonga, main sune nahi doonga)."

Ronnit also argued that Aly's intentions were indeed violent and showed during the fight. "If he didn't want to hurt anyone there was another trash bin lying behind he could have kicked it but he hit the one close to Kavita, this goes on to show his intention. We all saw how aggressive he was getting, if a man is so aggressive with a woman then we can understand that there is certainly something wrong with his mind. Because of people like him, other men who are good towards women also get bashed."

Ronnit also took a dig at the other male contestants present in the house. "Hum itni badi badi baatein karte hain about respecting women, Beti Padhao Beti bachao, all of these goes into a drain we see such behaviour on national television. I am very proud of Kavita that she has stood up against so many people. All the other so called men in the house, who had problems when Jasmin had a breakdown and had an issue with Rahul which was again not an issue and was created, few 'so called men' stood by her. But surprisingly, in last night's episode no one said that Aly you are doing wrong and if Kavita said it, you also repeated it, thrice. Ye joh baaki aadmi hai Bigg Boss ke ghar mein pata nahi inko kasie aadmi kahein."

Ronnit is also of the opinion that Aly's bestie Jasmin Bhasin, who in the past few episodes, has been targeting Kavita, is now shing her rel side. "After watching the recent episodes I have started to feel that in the show a woman is another woman's biggest enemy. What we saw of Jasmin Bhasin in the first few weeks was absolutely fake and we are getting to see her real side now. Now, she is coming into her element and can only mock and imitate Kavita and she thinks she is funny. I can't believe an actor can do something like this to a senior. She uses the same insulting behaviour with Eijaz Khan also. Eijaz and Kavita are still closer in age wise. Eijaz is 45, Kavita is 39 and Jasmin must be in 30s and despite having such a huge age difference she mocks Eijaz. We have got to see how much she respects her seniors. Even the audience and fans are seeing it."

Few of Ronnit's relatives, who are in law-enforcement, have approached him asking him if he wants to file a complaint against Aly Goni. "I have been getting a lot of calls from our well-wishers and relatives who are into the Police force, Government officials and they are asking me If I want to take action against Aly Goni or register a complaint. Although, I have told them that it is not needed, but I was expecting from the channel and the production house a stricter punishment. One week's nomination doesn't make any sense," concluded Ronnit.

(The above story first appeared on LatestLY on Nov 26, 2020 09:07 AM IST. For more news and updates on politics, world, sports, entertainment and lifestyle, log on to our website latestly.com).