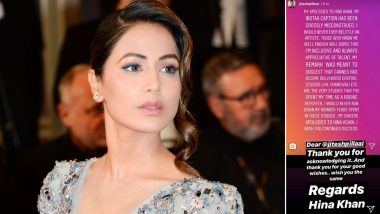 Here's how Hina Khan reacted to the journalist's apology over his offensive remark. (Photo Credits: Instagram)

Kasautii Zindagii Kay 2 actress Hina Khan, who recently made her Cannes 2019 debut and grabbed eyeballs with her unique style statement at the red carpet of the international event, left everyone awestruck with her stunning avatar. While the actress' social media accounts are flooded with praises and wishes from her fans and colleagues, a journalist mocked Hina for being a TV actress and making it to Cannes Film Festival. The journalist posted an Instagram story stating quiet an offensive remark for the actress as he wrote,"Cannes has suddenly become Chandivali studios kya?" Hina Khan at Cannes 2019: Actress Looks Ravishing in a Lavender Outfit and Fans Can’t Stop Gushing Over Her Day 3 Look (View Pics)

However, TV fraternity, who is obviously proud of the shining star, took to the photo-sharing app to bash him for his insensitive remark. On Friday, Jitesh took to his social media account to share his apology in an Instagram story. Guess what? Hina, who did not feel the need to respond to his offensive nay insensitive remark, acknowledged his apology. Karanvir Bohra and Arjun Bijlani Slam a Journalist After He Posts Harsh Comment on Hina Khan’s Cannes 2019 Look

On the career front, Hina will soon make her Bollywood debut with Lines. Other than this, she will also be seen in Arijit Singh's next music video titled "Raanjhanaa", in which she will be paired opposite Priyank Sharma. Hina has also bagged another project, which is going to be a women-centric film and will be helmed by popular filmmaker Vikram Bhatt! Stay tuned to LatestLY for further updates.

(The above story first appeared on LatestLY on May 17, 2019 10:33 AM IST. For more news and updates on politics, world, sports, entertainment and lifestyle, log on to our website latestly.com).