I Am Groot is a five episode animated shorts created by Kirsten Lepore. Vin Diesel continues to voice the character, with Bradley Cooper's Rocket Raccoon also making a cameo in one of the episodes. I Am Groot is streaming on Disney+ Hotstar. 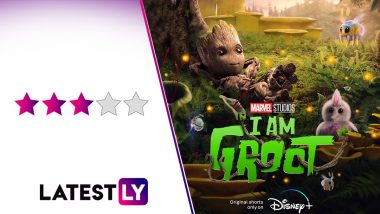 I am Groot Review: Let me start this review with a MAJOR complaint about Marvel's new Disney+ animated series. It is way too short! The episodes get over before you know it, and the five-episode season barely manages to cross the total runtime of 15 minutes. This is sad, because even if it feels unnecessary, I Am Groot is enticingly amusing and marvellously animated, making you fall more in love with Groot. James Gunn Reveals Groot's Favourite Guardians Character and It's Not Rocket!

I Am Groot is set between that 'Dancing Groot' post -credit scene from the first Guardians of the Galaxy film and, perhaps, before the beginning of the second Guardians film. James Gunn, the director of both the movies and the upcoming GOTG entry as well, isn't sure that I Am Groot is canon to his movies. I believe he can relax - I Am Groot doesn't change any dynamics of the movies, or the characters themselves, but just unassumingly plays along with Groot's naive, curious and occasionally morbid antics.

The first episode has him discover what it feels to be outside his pot, when he grows enough to not fit in it anymore. The second short has him dealing with the outside world perhaps for the first time, where he gets to have his own 'Gulliver's Travels' kinda scene.

My favourite is the third short about Baby Groot discovering that the Milano, Guardians' spacecraft, has a spooky visitor. Why is it my fave? Because there is an awesome Groot dance-off, though the conclusion to that dance-off is unexpectedly dark. It reminds you that, though Groot is cute and all, he can 'break bad' any moment, and this is perhaps a precursor to that time when he went berserk on his torturers in Guardians of the Galaxy Volume II.

Another favourite is the fifth short, which brings in Rocket Raccoon, voiced by Bradley Cooper, and also gives a glimpse of another Guardian. It has Groot turning Milano into a mess to make a sweet family portrait. Also, for the first time, we get to see Rocket wearing specs. The fourth episode is also fun and it also shows that if you mess with Groot, you are gonna get it. Guardians of the Galaxy Vol 3: Borat 2 Star Maria Bakalova Cast as Cosmo In James Gunn's Marvel Film!

Overall, the shorts are fun and enjoyable if you used to like those Tom and Jerry and Looney Tunes cartoons, or Disney+'s recently revealed Baymax shorts. One thing that needs to be praised is the animation. The photo-realistic effect is incredible, making all the characters and the world setting look real. Too bad the first season ends just when you are fully in for the ride!

I am Groot is harmless fun series of shorts, whose major drawback is that it ends way too soon and leaves you asking for more. The animation is fantastic and the kids are definitely going to have fun with Baby Groot's adventures. Here's hoping that Marvel drops more of these shorts soon enough, though of course, it goes without saying that not at the cost of over-exploiting its VFX team... Ahem ahem! I Am Groot is streaming on Disney+ Hotstar.

(The above story first appeared on LatestLY on Aug 10, 2022 03:34 PM IST. For more news and updates on politics, world, sports, entertainment and lifestyle, log on to our website latestly.com).