Bollywood composer-singer Sajid Khan says the anthem for reality show, Indian Pro Music League, is close to his heart because it is one of the last compositions he created with his late brother Wajid Khan. 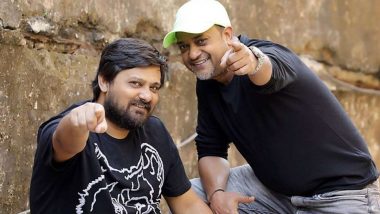 Bollywood composer-singer Sajid Khan says the anthem for reality show, Indian Pro Music League, is close to his heart because it is one of the last compositions he created with his late brother Wajid Khan. "In my entire career, the ‘Indian Pro Music League Anthem' has taken me the longest time to compose and record. Wajid and I were kicked about it when it came to us and we worked on it day and night," Sajid recalled. "This is one of our last pieces of composition together and, hence, I am very emotional about it and it is very close to my heart," he added. Salman Khan, Sohail and Sajid Celebrate Late Wajid Khan’s Birth Anniversary in a Special Way (Watch Video)

Talking about the track, Sajid said: "What makes this even more magical is that we have 18 top singers singing such an anthem for the very first time. Talking about the anthem, it is quite different from our usual compositions. It is upbeat, charged with passion and has a lot of regional flavours to it. I can't wait and watch to see the audience's reaction." The anthem was unveiled at Zee Rishtey Awards 2020 on December 27. The music league will have six teams representing different regions of India. Each of these six teams are supported by leading Bollywood and sports celebrities, and will have top playback singers as their captains. Himesh Reshammiya, Alka Yagnik Pay Tribute to Late Wajid Khan

The track is sung by 12 playback singers who will be seen as team captains on the show. Mika Singh, Kailash Kher, Sajid Khan, Shaan, Ankit Tiwari, Javed Ali, Asees Kaur, Bhoomi Trivedi, Akriti Kakar, Payal Dev, Neha Bhasin, and Shilpa Rao have been signed on to captain the six zonal teams. The ambassadors of the league's zonal teams are Shraddha Kapoor and Govinda with their families. Rajkummar Rao, Riteish Deshmukh and Genelia, Bobby Deol and Suresh Raina are seen grooving to the spirited track.

Apart from the 12 captains, the track also features the vocal stylings of the six reality stars -- Purva Mantri, Rupali Jagga, Hemant Brijwasi, Salman Ali, Rituraj Mohanty and Ankush Bhardwaj, who are a part of the six zonal teams. The show will air on Zee TV soon.

(The above story first appeared on LatestLY on Dec 29, 2020 06:46 PM IST. For more news and updates on politics, world, sports, entertainment and lifestyle, log on to our website latestly.com).