Well, this isn't Karan's first exit from Kasautii Zindagii Kay 2. The actor had quit his show last year in October 2019 as he was unhappy with how his character was shaping up. 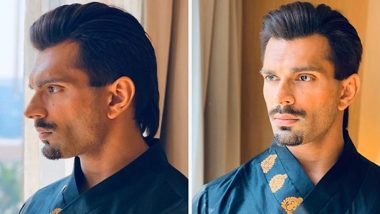 TBH, the whole hullabaloo surrounding Karan Singh Grover's return to Kasautii Zindagii Kay 2 as Rishab Bajaj does not seem to end anytime soon. It was earlier reported that Karan was not keen on returning to shoot for the show, given the on-going COVID-19 pandemic and expose himself. However, the show makers have been trying hard to convince Grover to return, considering how his recent re-return to Kasautii in February had soared TRPs for the show. In fact, Karan and Erica's jodi of Rishab and Prerna has as many shippers as Parth and Erica's who play the lead couple Anurag and Prerna. Kasautii Zindagii Kay 2: Parth Samthaan To Return To Mumbai To Self-Quarantine And Start Shooting, Karan Singh Grover Might Not Return To The Show (Deets Inside).

While the makers still want Karan to return as Rishab Bajaj, they aren't entirely counting on the actor agreeing and hence have been on the look out for other replacements and names of actors like Gaurav Chopra, Sharad Kelkar and Karan Patel have been sprung up. Kasautii Zindagii Kay 2: Karan Patel In The Race To Replace Karan Singh Grover As Rishab Bajaj?.

However, a new development has occurred with regards to Karan's walkout from Kasautii.... Apparently, COVID-19 is not the only reason for Karan stepping out of the Star Plus show. If reports are to be believed, Karan is also not entirely on-board with how his character of Rishab Bajaj is being treated by the makers - a supporting side role. Karan Singh Grover Returns to Kasautii Zindagii Kay 2, Check Out His Shirtless Stills As He Rescues Prerna From A River.

If reports in Pinkvilla are to be believed, Karan has developed major reservations with how Rishab Bajaj's character has shaped up and is on the unhappy side. He is also in talks with the show creatives to see if Rishab Bajaj's role will be re-worked.

"Apart from the coronavirus pandemic being a cause of worry for Karan, the actor was not happy with the way Mr Bajaj's character was been portrayed on the show. It is well known that Mr Bajaj's character in the first part was predominantly positive and was etched much better and was one of the leading ones. Here he felt the character was unnecessarily been portrayed grey and lacked depth. Moreover, it was being treated like a supporting character which had already upset him. Right now, he is discussing with the team to possibly have the character etched out better," a source revealed to the portal.

Well, this isn't Karan's first exit from Kasautii Zindagii Kay 2. The actor had quit his show last year in October 2019 as he was unhappy with how his character was shaping up. Well, we genuinely hope that Karan and makers work out a way here, for the actor was doing a great job in the show and looked really good opposite Erica Fernandes.

(The above story first appeared on LatestLY on Jun 22, 2020 09:39 AM IST. For more news and updates on politics, world, sports, entertainment and lifestyle, log on to our website latestly.com).