Mohit Malik recently injured himself on the sets while shooting a scene. 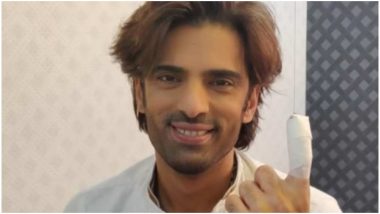 Mohit Malik recently injured himself on the sets while shooting a scene. (Photo Credit: File Photo)

Actor Mohit Malik, who is currently seen as Sikandar Singh Gill in the StarPlus show, Kulfi Kumar Bajewala, recently injured himself on the sets while shooting a scene. Reportedly, the actor, who has been shooting round the clock for the family drama, was filming for a rather intense scene with Anjali Anand (who is seen as his on-screen wife Lovely) and hurt himself in the process. Talking about it, Malik, in a statement to News 18, said, "I was shooting for a scene with Anjali where she was choking and I had to save her. In order to do that, I had to clear all the things from the table in one go. The scene went well but I didn't realise that my finger had started bleeding." The shoot was stalled for two hours as the actor was immediately rushed to a nearby doctor. BARC Report Week 38: Naagin 3 and Dance Deewane’s Grand Finale Beat Salman Khan’s Bigg Boss 12 in the Race

Reportedly, Malik, who injured his index finger of his left hand, had to undergo six stitches due to this severe injury. However, the injury didn't stop Malik from working. The actor further told the online portal, "We waited for 20 minutes but the bleeding wouldn't stop. So, in the middle of the shoot, I was rushed to a hospital where I got six stitches. It is weird to have stitches on your hand because it gets difficult to do any daily work. But as they say, the show must go on, so I'm back on set and shooting."

(The above story first appeared on LatestLY on Jan 11, 2019 01:54 PM IST. For more news and updates on politics, world, sports, entertainment and lifestyle, log on to our website latestly.com).