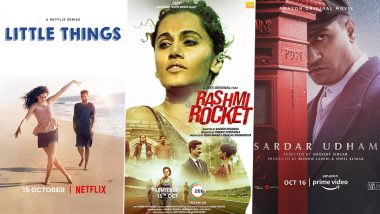 We are stepping on the third week of October 2021, and there are several interesting movies and series releasing on OTT platforms like Disney+ Hotstar, ZEE5, Amazon Prime Video and Netflix. Talking about the biggest release of the week it would be Rashmi Rocket, which is all set to premiere on ZEE5 on October 15. Helmed by Akarsh Khurana, the film is about an inspiring story of a small-town girl, who overcomes all societal barriers to become a national-level athlete, but her glory is hampered when she is asked to undergo a gender test. The sports drama stars Taapsee Pannu, Priyanshu Painyuli and Abhishek Banerjee. Rashmi Rocket: Taapsee Pannu Proves Why She Is Our Favourite in Just Three Mere Minutes of an Intriguing Trailer.

Another big release of the week would be Little Things Season 4, which is all set to stream on Netflix from October 15. Directed by Ajay Bhuyan and Ruchir Arun. Mithila Palkar, Dhruv Sehgal's comedy-romance series will be back again with magical final season and much more mature side of love. Another interesting release of the week would be Sardar Udham, which will drop on Amazon Prime Video on October 16. Shoojit Sircar's directed biographical film about Udham Singh, a revolutionary freedom fighter best known for assassinating Michael O'Dwyer in London to take revenge for 1919 Jallianwala Bagh massacre in Amritsar. The flick stars Vicky Kaushal in lead roles. Sardar Udham: Vicky Kaushal Shares a Reel vs Real Still From the Film, Applauds Shoojit Sircar for Recreating Scenes So Aptly.

(The above story first appeared on LatestLY on Oct 11, 2021 05:21 PM IST. For more news and updates on politics, world, sports, entertainment and lifestyle, log on to our website latestly.com).