Devoleena Bhattacharjee is back as Gopi Bahu in her Rasoda. Watch Saath Nibhaana Saathuya 2 promo here. 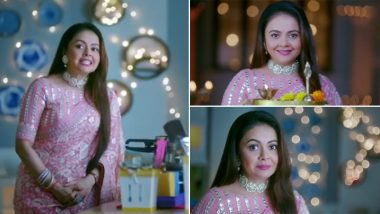 It was due to an artist namely Yashraj Mukhate that Star Plus' iconic serial Saath Nibhaana Saathiya starring Kokilaben, Gopi Bahu and Rashi once again became the talk of the town. Mukhate had tweaked 'Rasode Mein Kaun Tha' scene from the daily soap and converted it into a rap which went viral everywhere. After the same in an interview with a  leading daily, Rashmi Sharma, the producer of the serial had confirmed that SNS's season two is on its way. And well, while we were digesting the comeback news of the show, the first promo of the serial is out and it sees Devoleena Bhattacharjee as Gopi Bahu. EXCLUSIVE: Rupal Patel aka Kokilaben Denies Being Approached For Saath Nibhaana Saathiya 2.

Right from the old music of SNS to the innocence of Gopi, Devoleena in the video will surely make you nostalgic. The clip starts with Devoleena entering the frame looking gorgeous in a blush pink saree and then greeting her fans with 'Jai Shree Krishna'. She also introduces the name of a new character Gehna and makes fans curious. We also get to hear the voice of Kokilaben in the promo. However, earlier in an interview with us, Rupal Patel had denied being approached for SNS 2. 'Rasode Mein Kaun Tha' Video Fans Can Rejoice as Saath Nibhaana Saathiya Returns with Kokilaben and Gopi Bahu.

Well, after looking at Saath Nibhana Saathiya 2 promo we are damn excited to witness the show. Meanwhile, reports have been doing rounds that the makers are planning to get Sidhartn Shukla onboard as the male lead opposite Devoleena. In season one, Bhattacharjee was paired with Mohammad Nazim aka Ahem Modi. Stay tuned!

(The above story first appeared on LatestLY on Sep 01, 2020 10:23 AM IST. For more news and updates on politics, world, sports, entertainment and lifestyle, log on to our website latestly.com).