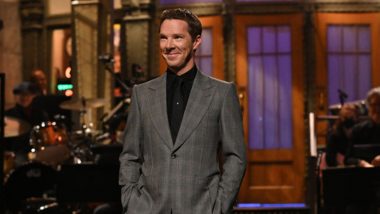 British star Benedict Cumberbatch joked about Will Smith's Oscars controversy with Chris Rock in his Saturday Night Live monologue. The 45-year-old star was nominated for the Best Actor gong at the Academy Awards for his performance in The Power of the Dog. Cumberbatch said during his monologue: "I really am thrilled to be back hosting Saturday Night Live It's been a really fun, great week." Doctor Strange in the Multiverse of Madness: Funny Memes and Jokes Trend After Benedict Cumberbatch’s Marvel Film Releases Worldwide.

"I have to be honest, though, because most of the sketch writers pitched me sketches every day, and most were about 'Doctor Strange' - which is great, I love the guy, I love playing the character ... but I have been in other films." He joked that Lorne Michaels - the executive producer of 'Saturday Night Live' - asked him what other films he'd appeared in, reports femalefirst.co.uk. Doctor Strange in the Multiverse of Madness Box Office Collection Day 3: Benedict Cumberbatch’s Marvel Flick Earns Rs 79.50 Crore in India!

The actor added: "I said, 'Well, like The Power of the Dog. And he said, Nobody saw it.' I said, 'Come on, man, I was nominated for an Oscar for that.' I mean, I didn't win. I was beat by Will Smith." He then added: "No, not physically! Not physically!"

Benedict Cumberbatch jokes on SNL: “I didn't win the Oscar... I was beat by Will Smith” 🙊

Smith smacked Rock during the Oscars ceremony, after the stand-up comedian made a joke about his wife. The Hollywood star subsequently described his behaviour as "shocking, painful, and inexcusable".

(The above story first appeared on LatestLY on May 09, 2022 02:40 PM IST. For more news and updates on politics, world, sports, entertainment and lifestyle, log on to our website latestly.com).