The Family Man 2: Manoj Bajpayee Says He Is 'Forever Indebted' to the Team for Working Through Pandemic (View Post) 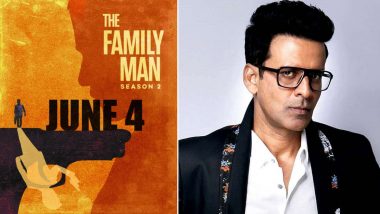 Ahead of the premiere of 'The Family Man 2', actor Manoj Bajpayee thanked the whole cast and crew for working tirelessly amid the pandemic despite their personal losses and sufferings. The 'Aligarh' actor took to his Instagram to post a heartfelt note ahead of the premiere of the show's second season."Every filmmaker has a tale to tell at the end of every project about its highs and lows. For us, 'The Family Man' season 2 has proved to be our most challenging project yet," he wrote in the caption alongside a poster of the show. The Family Man Season 2: Review, Cast, Story, Streaming Date and Time of Manoj Bajpayee and Samantha Akkineni’s Series on Amazon Prime Video.

He added, "These are difficult times for all of us. There isn't anyone amongst us untouched by loss and suffering. While we mourn the tragic loss of lives, we are grateful for the heroic actions and courage of the frontline workers and everyone working tirelessly to provide aid during these times." "For all of us, staying positive and optimistic has possibly been the hardest. The only thing that has kept us going through all of it is the constant love and appreciation (and the constant pressure) that we have received from every one of you," Manoj continued. OTT Releases of The Week: Manoj Bajpayee's The Family Man Season 2 on Amazon Prime Video, Christian Convery's Sweet Tooth on Netflix, Patrick Wilson's The Conjuring 3 on HBO Max and More.

"Having worked through a pandemic and two lockdowns, we are forever indebted to our fabulous cast, crew, and Prime Video team who have persevered through it all," he wrote, sharing his excitement about the new season of his web series, 'The Family Man'. "Season 2 drops at midnight. And one thing is overwhelmingly clear: 'The Family Man' now belongs to you, the audience, and all its fans. We remain forever humbled by all the love we have received," Manoj concluded.

Created by Raj and DK, the show revolved around the story of a middle-class family man who is also a world-class spy, Srikant Tiwari, ably portrayed by Manoj Bajpayee. The second season of the show will start streaming on Amazon Prime Video from June 4. Actor Samantha Akkineni will also be seen essaying an important role in the upcoming season, which also features Sharad Kelkar, Sunny Hinduja and Vedant Sinha.