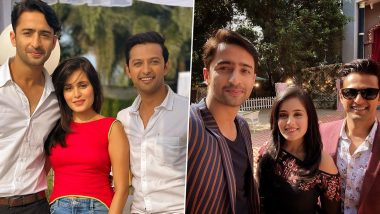 Actor Vatsal Sheth, who recently entered Yeh Rishtey Hain Pyaar Ke as Nishant, is all set to bid goodbye to the show in the ensuing episodes. The actor was roped in as the parallel lead for the Yeh Rishta Kya Kehlata Hai spin-off in a pivotal role, which has now come to an end. Vatsal entered opposite lead actress Rhea Sharma aka Mishti's best friend, whom she had gone to stay with in London after her big break up with Abir (Shaheer Sheikh). Eventually, it is shown that Nishant has fallen in love with Mishti and has agreed to marry her, while the latter only agrees for the alliance for the happiness of her family. Year Ender 2019: Yeh Rishtey Hain Pyaar Ke, Chhoti Sardaarni, Kaun Banega Crorepati - Some Of The Best Shows On Television This Year!

All this while, a guilty Abir who realises his folly of leaving Mishti at the altar, tries to win her back and Mishti is forced to chose sides between her best friend and love. Vatsal's character was initially positive and even helped Mishti in reaching out to Abir, but after realising his love, Nishant's character turned grey. However, in the upcoming episodes, looks like Abir will eventually expose Nishant and that will be the end of his character in the show.

Actor and co-star Shaheer Sheikh along with the entire cast and crew of the show threw Vatsal a farewell party and also invited were Vatsal's wife Ishita Dutta and her Bepanah Pyaar co-star, Pearl V Puri.

Yeh Rishtey Hain Pyaar Ke's latest episode ended in a cliff hanger with Abir meeting with an accident and falling into a lake. Nannu witnesses the accident but decides against helping ABbir and even tricks Mishti into believing that Abir is fine and does not want to meet her again.

(The above story first appeared on LatestLY on Jan 29, 2020 10:28 PM IST. For more news and updates on politics, world, sports, entertainment and lifestyle, log on to our website latestly.com).