"No concrete step has been taken to raise our disposable income," the top union leader said. 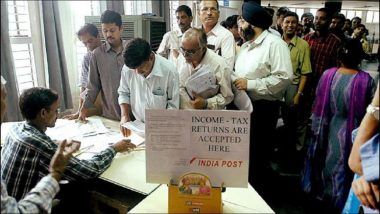 "No concrete step has been taken to raise our disposable income," the top union leader said. (PTI image used for representational purpose)

Mishra said the government has failed to safeguard the interest of the salaried class despite the spiralling inflation and rising commodity prices.

"The overall Budget has been a disappointment for the entire salaried class. There are no changes in the Income Tax slabs, no alterations have been made to increase tax reductions or rebates. All in all, no concrete step has been taken to raise our disposable income," he said while speaking to Latestly.

While the Finance Minister announced an increase in standard deduction -- medical and transport reimbursement -- to Rs 40,000, which is Rs 35,000 at present, the Budget document raises the cess rate on Income from the incumbent 3 per cent to 4 percent.

The minimum wage, as per the 7th CPC recommendations, was hiked to Rs 18,000 from Rs 7,000. Mishra, however, claims that the increment is inadequate considering the current CPI inflation rate.

"We have demanded an increase in the minimum wage up to Rs 26,000 using 3.68 as the fitment factor (the multiplying proponent on the 6th Pay Commission wage). However, we are ready to negotiate further," he had told this reporter in an earlier conversation.

Commenting on the Railway Budget, Mishra, who also heads the All India Railwaymen Federation, said the focus of the government on electrification and enhancing safety measures should be lauded. "But, we believe that the amount allocated (Rs 1,48,500 crore) to the Railway sector is inadequate," he added.

(The above story first appeared on LatestLY on Feb 01, 2018 10:43 PM IST. For more news and updates on politics, world, sports, entertainment and lifestyle, log on to our website latestly.com).