Himachal Pradesh Chief Minister Jairam Thakur on Wednesday said that police teams have been formed to nab the hotelier, who shot dead an assistant town and country planning officer, who was leading a demolition drive. 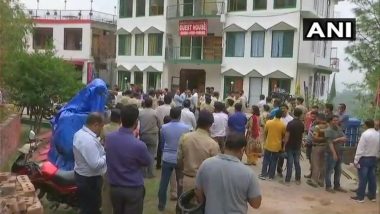 Shimla (Himachal Pradesh), May 2:  Himachal Pradesh Chief Minister Jairam Thakur on Wednesday said that police teams have been formed to nab the hotelier, who shot dead an assistant town and country planning officer, who was leading a demolition drive.

Terming the incident as "sad and unfortunate", Thakur told ANI, "The Supreme Court had passed a National Green Tribunal (NGT) order to take action against unauthorised constructions in the state. Police was also present at the site (in Dharampur area). But, there was another unauthorised construction was going on nearby and the police had to go there.

The woman, who was leading the demolition drive there (in Dharampur area) was shot dead afterwards. A labour has been injured. We will submit a status report in SC tomorrow. The Divisional Commissioner Shimla will investigate the matter. Police teams have been formed to nab the culprit."

The Supreme Court last month had ordered the demolition of unauthorised constructions at several hotels and resorts built in violation of sanctioned plans in Kasauli in Himachal Pradesh.

Meanwhile, the mother of the accused told ANI, "His mind was disturbed since many days. I didn't see nor do I know who killed her. We did everything that the authorities asked us to do. But what has happened is a very sad incident. She was doing her job only."

Shailbala Sharma (51), along with four teams of the Town and Country Planning Department, were razing unauthorised construction in the area, on the order of the High Court, when the incident took place on Tuesday.

When Sharma and her team reached Narayani Guest House in Dharmapur area in Solan district, its owner Vijay Singh asked them to keep off his property. When the team went ahead with the demolition and tried to get the place evacuated, Singh opened fire on them.

The Supreme Court on Wednesday took suo moto cognisance of the incident also rapped the state government for not providing adequate security to the woman officer.

The court, during the hearing, also observed that it was a very serious issue as the accused had allegedly killed the woman official in broad daylight and the police could not arrest him.