On Friday, thousands of students and Congress youth leaders held protests in several parts of the national capital against the board papers being leaked. The students accused the board of negligence and demanding immediate action against the guilty. 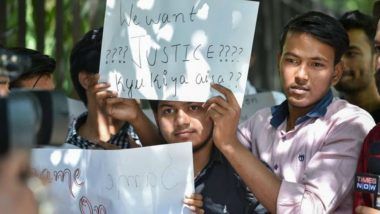 New Delhi, March 31:  In wake of the escalating tensions over Central Board of Secondary Education (CBSE) Class 10 Mathematics and Class 12 Economics paper leak, scores of Staff Selection Commission (SSC) and National Eligibility and Entrance Test (NEET) aspirants joined the protest on Saturday at Parliament Street in the national capital.

On Friday, thousands of students and Congress youth leaders held protests in several parts of the national capital against the board papers being leaked. The students accused the board of negligence and demanding immediate action against the guilty.

On Saturday, the Delhi Police sent three teams to schools, exam centers and residences of students in outer Delhi. As per reports, more than 60 people have been questioned till now out of which 10 are tutors of coaching centers. Over 50 cell phones of students and tutors have been seized till now, the Police informed. Reports inform that 3 have been arrested and 9 minors have been detained by Chatra police in Jharkhand in connection with the paper leak scam.

Those detained include co-owners of Chatra-based coaching institute Study Vision, Pankaj Singh and Satish Pandey. Police swung into action after Dawesh Narayan, principal of Jawahar Navodaya Vidyalaya (JNV) in Chatra, a centre for CBSE board examinations, filed an FIR.

Earlier in the morning on Saturday, a group of students staged a demonstration near the Central Board of Secondary Education (CBSE) office at Preet Vihar in New Delhi against the paper leaks. "The students tried to block the road in front of the CBSE office, but we kept them away. A group of about 25-30 students are protesting outside the CBSE office," said a senior Delhi Police officer

Earlier this week, student groups and the Delhi Pradesh Congress Committee (DPCC) also demonstrated outside the CBSE headquarters in east Delhi's Preet Vihar, raising various demands, including an independent investigation. Protests are also being held by students at Jantar Mantar in Delhi against the CBSE's decision to hold re-examination. Some also feel that feel many other question papers were leaked before the exams.

(The above story first appeared on LatestLY on Mar 31, 2018 04:21 PM IST. For more news and updates on politics, world, sports, entertainment and lifestyle, log on to our website latestly.com).