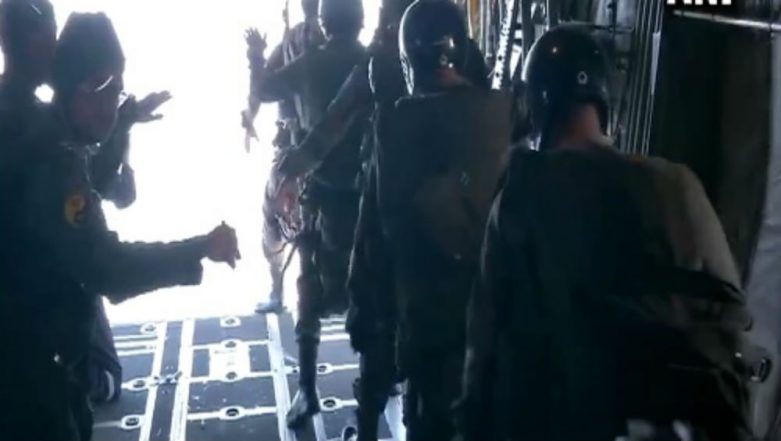 Photo of the operation in Hindon AFS (Photo Credit: ANI)

Ghaziabad, April 15: A day after the Indian Air Force exhibited a stunning display of its mid-air refueling capability as the Sukhoi Fighter Jet was re-pumped mid-aid during the Gagan Shakti exercise at West Bengal's Kalaikunda, the Indian Air Force today conducted battalion level air drop as part of exercise from Hindon Airbase. The Hindon Air Force Station is the biggest and largest air base in Asia and 8th largest in the world.

On April 14, the Sukhoi Su-30 fighter, which had travelled from Kharagpur to Lakshadweep as part of the exercise was refuelled twice in its journey. The aircraft successfully returned at the airbase in Kalaikunda from where it had took off as part of the wargames exercise.

During an aerial exercise on February 27, the Hindustan Aeronautics Limited had successfully successfully carried out a hot refuelling procedure on the indigenous Light Combat Aircraft-Tejas at the HAL airfield.

Hot re-fuelling, or in-flight re-fuelling is a complex procedure involving the integration of a probe on to the front of the canopy and on the right side of the aircraft. It involves a single point pressure refueling of the aircraft with the engine in operation.

This capability is highly desired in combat situations which basically puts aside the need for the pilot to park the aircraft, power down and exit the cockpit for refueling to begin

The aerial refueling probe for the LCA Tejas Limited Series Production-8 (LSP-8) is being supplied by UK based Cobham.

Apart from HAL Tejas, the Mirage is another IAF fighter aircraft with mid-flight refueling capabilities. (With Agency Inputs)