Police said during the search operation, the hiding terrorist fired upon the search party, which was retaliated, leading to an encounter. 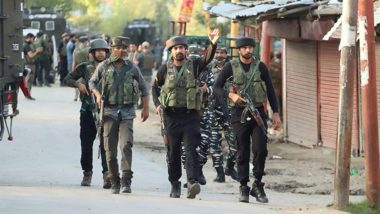 Srinagar, August 3: Pakistani LeT terrorist Babar Ali, who had escaped from the Shokbaba encounter on July 24, was on Tuesday killed in a gunfight with security forces who had tracked him down to a forested area of Jammu and Kashmir's Bandipora, police said.

"On July 23/24, three terrorists of proscribed terror outfit LeT, including Sharik Altaf (who had ex-filtrated in 2018), were killed in the Shokbaba encounter. However, terrorist Babar Ali had managed to escape from the said encounter site and was being continuously tracked rigorously thereafter. In furtherance of the tracking and after pinpointing his presence in Chandajji forest area today, a joint operation was launched by police, 26 Assam Rifles & CRPF in the said area," police said.

Police said during the search operation, the hiding terrorist fired upon the search party, which was retaliated, leading to an encounter.

In the ensuing gunfight, Babar Ali, a resident of Punjab's Pakistan province, was killed and his body was retrieved from the site.

Arms and ammunition including an AK rifle, two AK magazines, 40 AK rounds, one pouch, one wireless set and one medicine bag were recovered from the site of encounter.

Inspector General of Police, Kashmir, Vijay Kumar congratulated the joint team of the security forces for successfully tracking down the terrorist and conducting operation in a professional manner without any collateral damage.

(The above story first appeared on LatestLY on Aug 03, 2021 06:51 PM IST. For more news and updates on politics, world, sports, entertainment and lifestyle, log on to our website latestly.com).