In the wake of a slew of petitions filed in various courts over the Krishna Janmabhoomi-Shahi Eidgah dispute, the Uttar Pradesh Police have directed its units in eight districts to 'remain on high alert'. 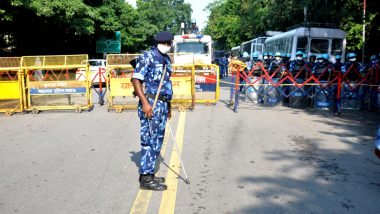 Lucknow, May 19: In the wake of a slew of petitions filed in various courts over the Krishna Janmabhoomi-Shahi Eidgah dispute, the Uttar Pradesh Police have directed its units in eight districts to 'remain on high alert'.

The petitioners have sought restrictions on the presence of Muslims at the mosque, situated near the Shri Krishna temple complex in the city. Krishna Janmabhoomi Case: Mathura Court Admits Plea Seeking Removal of Mosque

Additional Director General (Agra zone) Rajeev Krishna told reporters that he had issued instructions across eight districts of the Agra zone, which includes Mathura, to ensure security not only at the disputed site but elsewhere too, especially sensitive spots.

The ADG said that police chiefs of all the eight districts in the region have been instructed to keep a close watch on anti-social elements.

He said that if anyone tries to disrupt harmony in the name of religion, immediate action will be taken against them.

Mathura Senior Superintendent of Police (SSP) Gaurav Grover said that the security has been tightened in the district and all efforts are being made to maintain peace.

This came even as a fresh plea was filed in the court of the civil judge (senior division) on Wednesday by Akhil Bharat Hindu Mahasabha's Dinesh Sharma who said that 'being a Hindu', he had the right to offer prayers at the Idgah as it was an ancient temple.

A bunch of other pleas have sought a survey of the grand mosque to determine evidence of Hindu worship. Others have demanded stopping the access to the Muslim worshippers.

In all, 11 cases have been filed in the matter till now.

(The above story first appeared on LatestLY on May 19, 2022 10:37 AM IST. For more news and updates on politics, world, sports, entertainment and lifestyle, log on to our website latestly.com).