4G Internet Service in Jammu And Kashmir's 2 Districts to be Restored After August 15 on Trial Basis, Centre Tells Supreme Court 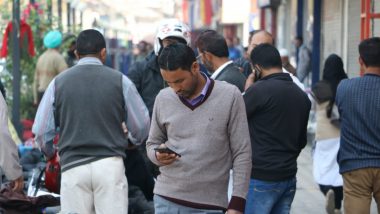 Representing the Central government in the Supreme Court, Attorney General KK Venugopal that the Centre has decided to restore 4G internet service on a trial basis in the newly formed Union territory. He added that the 4G services will only be restored in one district each of Jammu and Kashmir for two months. After this period, the government will review the situation. Jammu and Kashmir: Supreme Court Asks Centre, UT Admin to File Response on Internet Ban

KK Venugopal even informed the apex court that the 4G internet service will not be restored in the districts close or adjoining to International Border or the Line of Control. Adding more, Venugopal -- representing the Centre -- said that the services will be restored only in those areas which have a low intensity of terrorist activities.

(The above story first appeared on LatestLY on Aug 11, 2020 12:51 PM IST. For more news and updates on politics, world, sports, entertainment and lifestyle, log on to our website latestly.com).