The victory has been special for various reasons but most of all, the party has been rejoicing over the fact that a candidate with no political connections whatsoever managed to defeat political heavyweights in the area, a scenario that the AAP is plenty familiar with. 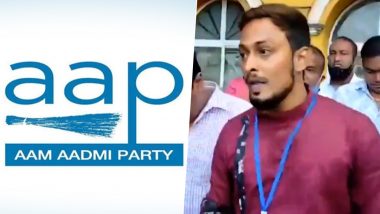 In a big win for the Aam Aadmi Party, AAP’s 26-year-old candidate won the party its first-ever election in the coastal state in the recent Zilla Panchayat elections. The victory has been special for various reasons but most of all, the party has been rejoicing over the fact that a candidate with no political connections whatsoever managed to defeat political heavyweights in the area, a scenario that the AAP is plenty familiar with.

Even though Fernandes, a first-timer in politics, has been an AAP supporter for years, it was by chance that party volunteers showed up at his doorstep a few months ago, leading to his nomination from Benaulim. “I’m a mechanical engineer by training and have been working with my father as a carpenter. Although I have, since my school days, been passionate about environmental issues and have also worked for preserving Goa’s environment alongside my mother, I had no intention of entering politics. It was when AAP volunteers came home as a part of their campaign that my mother told them about my work and my wish to see change take place in Benaulim. I am grateful that the AAP trusted someone as young as me to take on the political heavyweights in my village,” Fernandes said. Goa Zilla Panchayat Election Results 2020 Live Updates: BJP Wins 32 Seats, Congress Bags Only 4.

Victory Celebration in Goa as @AAPGoa wins its first seat in ZP election.

Congratulations to Hanzel Fernandes and @AAPGoa. This is just the beginning. pic.twitter.com/o24AfAN43i

Fernandes’ passion to preserve Goa’s pristine surroundings has roots in his childhood. He recalls, “Things were different when we were growing up in Benaulim than how they are now. There were many fields and ponds in my area where we would go to pluck lotusesas children. Today, all the good thingsare disappearing. They are being replaced by large-scale constructions, and it upset me to see that there’s nothing left for the future generations. This, along with the poor state of facilities in Benaulim, is what motivated me to stand up for what I am passionate about. Despite residents continuously pleading with the government to improve facilities, there has been no action taken. It was high time someone stepped in and took charge.”

Fernandes defeated Congress candidate, former sarpanch Royla Fernandes, and NCP’s Menino Fernandes, both seasoned politicians having significant clout. Fernandes’ assessment shows that the people of Goa are fed up with the current structure in the state. “It is clear from my win in Benaulim that people have had enough. In Goa, the government is unsteady with politicians jumping from one party to the other, backstabbing those who voted them to power. They have destroyed Goain the name of development. But this time,

people have revolted and have decided to give mea chance, give the AAP a chance. We will make sure that people in Benaulim have their dreams fulfilled. We will work to improve facilities in the area with a special focus on healthcareand the environment,and stand true to our word,” Fernandes shared.

Wise beyond his years, Fernandes understands that the two political parties in the state might create hurdles for him to work in Benaulim. He appealed to the people of Goa to give the AAP a bigger chance in the upcoming 2022 Vidhan Sabha elections. “It is high time that Goa sees a positive change. I am grateful for people’s faith in me but one seat is not enough. If Goans want to see a change and get better facilities, I believe the AAP should be given at least one term so we can prove ourselves. It is my humble request to Goans to support the AAP and give us one term,” Fernandes signed off.