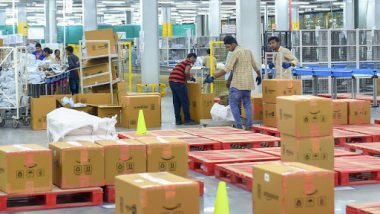 According to a report, published in the Bloomberg, Amazon founder Jeff Bezos has so far pledged USD 5.5 billion for its India operations. Amazon has set this amount to keep pace with global leader Walmart, which had bought Indian retailer Flipkart Online Services Pvt. last year for USD 16 billion. Amazon Food Delivery App To Take on Zomato, Swiggy With Lucrative Commissions to Lure Restaurants

Amazon's new building in Hyderabad is the company's first owned building outside of the United States. It spans 1.8 million square feet of office space and will accommodate 15,000 workers. This is the largest campus of Amazon in the world, even three times bigger than its Seattle house which has about 5,000 employees.

Apart from online marketing, Amazon is currently experimenting in various sectors in India. It is also mulling to buy a 10 percent stake in one of India's largest brick and mortar retailers Future Retail, reports NDTV Profit. Also, online food delivery is another sector the global firm is looking at.

Earlier, Amazon started its retail operations in India in 2013 and has added several services to boost sales. It has even launched Amazon Prime Video to woo movie-lovers and doubled the Prime membership in India over the past 18 months.

(The above story first appeared on LatestLY on Aug 21, 2019 05:04 PM IST. For more news and updates on politics, world, sports, entertainment and lifestyle, log on to our website latestly.com).