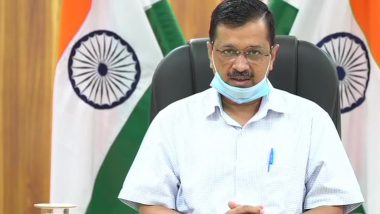 New Delhi, June 26: At a press conference held on Friday, Delhi Chief Minister Arvind Kejriwal said that the number of coronavirus cases in the national capital is high, but the situation is under control and there is no need to worry. He said, "We've increased testing by three times but positive cases have increased by around 3,000 per day only. Out of the total COVID19 patients, approx 45,000 people have recovered." The national capital has recorded a total of 70,390 cases, and 2,365 people have died so far, according to the Ministry of Health & Family Welfare website.

CM Kejriwal further mentioned that in the last one week, the number of beds occupied has been around 6,000 despite almost 3,000 new cases daily as most of the patients don't require hospitalisation. "COVID-19 cases in Delhi are mild and most of them don't require hospitalisation. Right now, we have over 13,000 beds ready," he elaborated. India Records 407 Deaths, Highest Single-Day Spike of 17,296 COVID-19 Cases in Past 24 Hours, Coronavirus Tally Jumps to 4.9 Lakh Cases.

Arvind Kejriwal Says 'No of Cases in Delhi is High, But Situation Under Control'

Speaking about plasma therapy, he mentioned, "It may be difficult to save very serious patients using plasma therapy, but it can help moderate patients by not letting their condition worsen. This is what we have found until now." Delhi CM further stated that the number of deaths has reduced to less than half as compared to earlier since the start of plasma therapy at LNJP hospital.

Talking about the provision of providing oximeter, Kejriwal said, "There are some patients whose oxygen level became very low but they showed no symptoms, it dropped suddenly and they died suddenly. So we have provided oxymeter to asymptomatic patients or those with mild symptoms who are under home isolation."

(The above story first appeared on LatestLY on Jun 26, 2020 01:32 PM IST. For more news and updates on politics, world, sports, entertainment and lifestyle, log on to our website latestly.com).